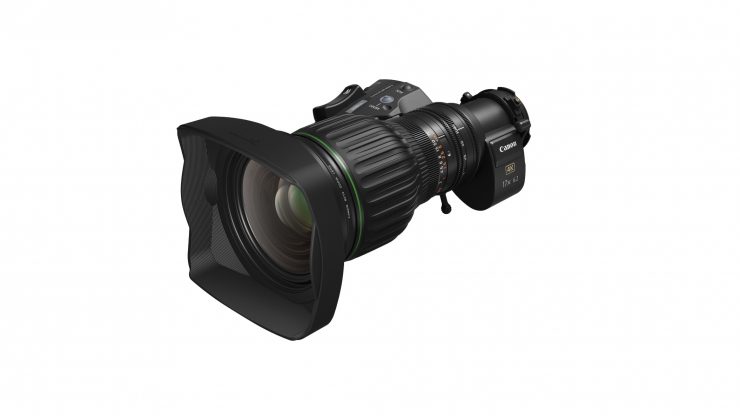 Canon has announced the new CJ17ex6.2B 17x Zoom with Built-In 2x Extender. This 2/3″ B4 lens features a newly designed lens barrel and coatings to help minimize ghosting and flaring.

The CJ17ex6.2B features a focal length of 6.2 mm to 106 mm. The lens is also equipped with a built-in 2x extender that allows you to double the focal length up to 212 mm. The lens utilizes UD (Ultra-low Dispersion) lens elements that have been arranged in a Canon proprietary optical configuration to help suppress chromatic aberrations such as color bleeding and fringing.

The CJ17ex6.2B joins Canon’s existing range of UHDgc series portable 4K broadcast zoom lenses. Canon now has 18 models in its 4K broadcast lens lineup. The lens is being targeted for use in Houses of Worship, ENG applications, and commercial environments.

The CJ17ex6.2B comes standard with a drive unit that contains 16-bit absolute value encoders, as well as three 20-pin connectors for integration into virtual and robotic systems.

The CJ17ex6.2B 4K UHD portable zoom broadcast lens is scheduled to be available in June 2021. Canon is yet to release a price for this lens.