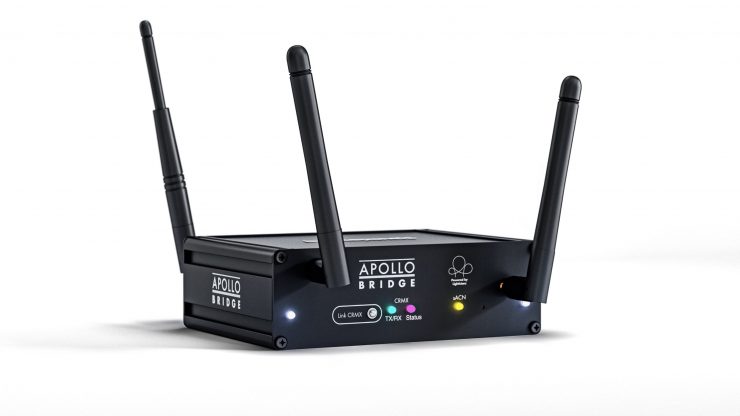 Even though Apollo Bridge has been optimized for use with Litepanels’ own range of Gemini RGBWW LED panels, it has also been designed to work with a wider range of lighting fixtures than any other system.

Apollo Bridge will allow you to operate any fixture with a DMX input, as well as DMX networking and wireless DMX equipment. Users can now create just one system for centralized control of their lighting with no restrictions on which lights they use.

You can use the free Lighticians Apollo Control to control any light connected to Apollo Bridge.

Apollo Bridge can also be used with any control software or console including Blackout, Luminair, ETC, GrandMA, and Chamsys to send commands, using the sACN DMX protocol, wirelessly or via the LAN ethernet port. Single DMX512 universe boards can also be used by connecting them through the Apollo Bridge 5-pin XLR I/O port.

The Apollo Bridge and iOS Lighticians Apollo Control app give lighting operators the ability to control and change lighting settings, DMX addresses and control modes on the fly. This is useful for those productions where time is short and lighting setups have to be done quickly.

The system features built-in dynamic RF transmission, that supports both 2.4 and 5GHz. According to Litepanels, this automatically avoids network interference and creates a dependable signal with no latency for complete reliability. With full sACN capabilities, multiple Apollo bridge units can be added to provide wireless DMX control to as many lights and universes as required to scale up on larger productions. Simultaneous CRMX and wired DMX output can be used to provide a built-in fail-safe or to quickly add more fixtures without needing to reconfigure a DMX network.

Q: How do I connect my lighting fixtures to the Apollo Bridge? Do I need additional hardware to do so?
Lights can be connected one of two ways, hardwired with a 5-pin XLR cable or connected wirelessly by linking the Apollo Bridge to a LumenRadio CRMX receiver that is either inserted to the light’s 5-pin DMX512 input, or in some cases, built into the light itself. The Litepanels Gemini and Astra require a Litepanels CRMX dongle or Module (sold separately), or a third party CRMX receiver to be able connect wirelessly.

Q: How do I connect my tablet, smart phone or console to the Apollo Bridge?
The Apollo Bridge transmits its own Local Area Network (LAN) stream using the sACN protocol. Like with any other wireless router, you can connect your control device by joining the ‘Apollo Bridge’ wireless network as you would with your home or office internet network. You can also connect a laptop, console or other network device via the LAN ethernet port

Q: How many lights can I control with the Apollo Bridge?
A single Apollo Bridge can stream DMX commands wirelessly and/or hardwired to one universe (512 channels) of DMX 512. The number of lights will vary based on the number of control channels in each light’s chosen control profile or personality. For example, The Astra requires 2 DMX channels so one Apollo can control up 256 Astras at a time. The Gemini in the 8-bit RGBW personality profile requires 8 DMX channels, so up to 64 could be controlled at one time. You can add one additional universe of DMX512 output for every additional Apollo Bridge you connect to your lighting network. This can be done wirelessly or by using the LAN ethernet ports.

Q: Can I control my lights from a remote location through a Wide Area Network (WAN)?
This feature is not yet implemented, but a VPN-based Wide Area Network workflow will be coming with a firmware update in 2021. This will allow users to control lights from across the globe by connecting their Apollo Bridge devices to the internet.

Q: What are some ways I can maximize wireless performance?
Ensure there is a clear and direct LINE OF SIGHT between the Apollo Bridge and connected wireless devices. Arrange external antennas from connected devices on the same plane. Separate the Apollo from radio device antennas of other networks as much as possible. Avoid scenarios where glass, metal caging, liquid or large groups of people are in between connected wireless devices. Also, in your control device’s network settings turn auto-join off for any other commonly used area Wi-Fi networks, turn cellular data off if using an iOS device and make sure the control device is within range of Apollo Bridge.