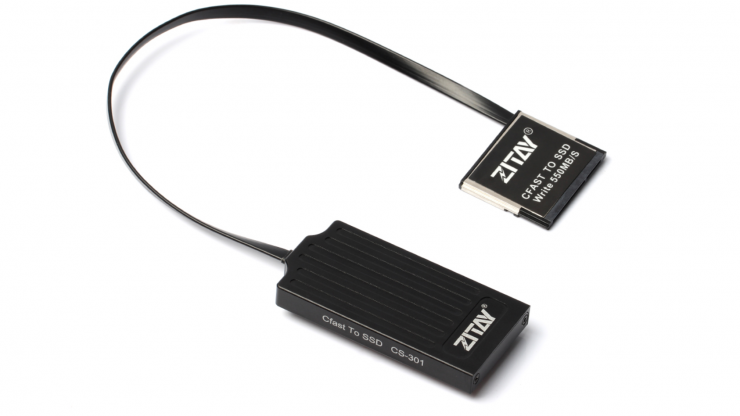 ZITAY CFast 2.0 Dummy Card to MSATA SSD Adapter can be used as a higher capacity, lower-cost replacement for CFast 2.0 cards.

This is not the first time someone has made a CFast 2.0 adapter and there have been several on the market for quite some time.

ZITAY claims that the CFast 2.0 Dummy Card to MSATA SSD Adapter will work with the following cameras:

Note: For Canon cameras such as C200, C300, 1DX2, and other models, the CFAST card slot cover can be fully closed.

ZITAY states that the cards maximum read speed is 550MB/s. ZITAY also recommends the use of Samsung 860 EVO SSD drives with the adapter.

The security of the data is independent of the converter and will depend on the SSD you are using. This is a single channel SSD converter so the maximum capacity of the SSD you can use is 1TB.

The casing is made out of aviation-grade aluminum alloy. No external power supply is needed as everything is powered via the camera’s CFast card slot.

The actual enclosure has two 1/4″ screw holes on the bottom so it can be mounted in a variety of ways.

The ZITAY CFast 2.0 Dummy Card to MSATA SSD Adapter is currently on sale for $54.50 USD.

ZITAY recommends the use of Samsung 860 EVO SSD drives.