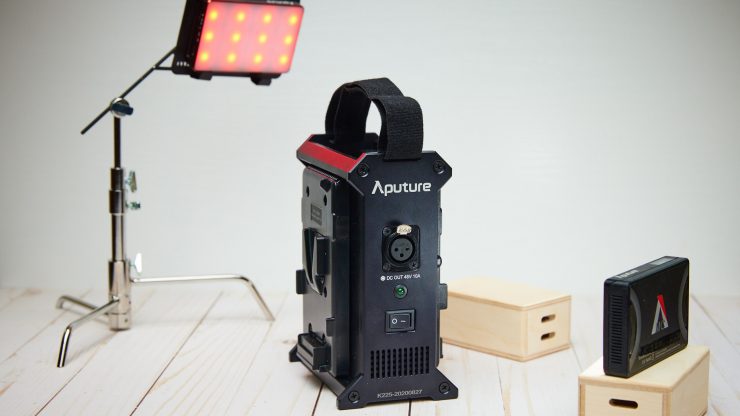 LED lights are getting brighter with higher wattage, making it difficult to power them with batteries. While battery technology is getting better by the day, a single V-Lock pack isn’t enough in some cases.
With fixtures like the Aputure NOVA P300c that don’t come with a battery option and require 300-watts continuous power for full output, the Power Station is a great solution.
The new Amaran 100d and 200d fixtures can also use the Power Station as they are 100 and 200-watt lights.

Aputure lights with 2-bay battery slots like the LS 300d MKII and even the LS 600d Pro drain the batteries in tandem since they use both to create one super battery. The Power Station does this and can be used with any fixture that uses the same cable connection configuration.

The Power Station stands tall and stable and has the same quick-release plate that the 300d & 600d Pro has. However, the clamp doesn’t come with the kit. You can purchase the Aputure Lighting Clamp for $68.

There is a fan, and when it kicks in, it’s fairly loud. While running the 200d for an hour, it kicked in for a few seconds, then turned off at around 1-hr and 10 min. It stayed on until the battery was fully depleted, which was one hour and 20 minutes.
If it’s hot in the location, it will run more often. Again this is from a continuously on test at 100%.

The kit includes an adapter cable to use with fixtures that have a 4-pin power connector. This is handy as the NOVA, and the Amaran lights are different.

The 480-watt max output means you can use the Power Station with many lights that meet or are under the wattage limit.
I tested the Amaran 100d and 200d, and it works great. With two 155 wh batteries, I got one hour and twenty minutes of run time at 100% output. As for The NOVA? It’s a power-hungry light at 360W maximum output, so you will need to use batteries that meet 360-watt combined or more.

Here is where it gets a little tricky. When combined, if you have batteries, fall short of the required wattage, the light won’t get enough juice to power it, and it will shut down. A workaround would be to use the light at half or less output. A lower setting will use fewer watts per hour.
Using a larger battery gives you some headroom, and I feel that is a good idea, so you can run at full output if needed, and when at a lower output setting, the battery will last longer.

Speaking of watts per hour and amps, this is important. Take the new CORE SWX NANO XL for example. It’s a 10 amp, 178 watts per hour battery, so if you have two, then the total watts per hour is 356Wh. Oh no! that’s not enough for the NOVA. Or is it?

I tested the Power Station and two NANO XL 178Wh batteries with the NOVA, and I couldn’t power it at full power. It shut off after approximately ten minutes. This makes sense since I was 4 watts short, and the battery is rated at 10 amps. As you can see, having the right wattage/amp battery makes a difference.
Aputure recommends 2 of the same batteries that can handle a 15A continuous power draw. That’s the key with the NOVA, as most batteries are 10 and 12 amps.
The Core SWX HELIX XL is an excellent choice for powering the NOVA due to its high capacity and 15 amps continuous. Unfortunately, it’s on the pricey side at $849 each.

Obviously, if you have bigger capacity batteries like the CORE SWX Hypercore XL 293wh 15 amp batteries, you would not only get full power but much longer runtimes at the combined 586 Wh.

Since the Power Station has the same quick-release plate as the NOVA, it can be mounted in the controller’s place. It will add a lot of weight, but if space on the ground is tight, it’s nice to have this option.

The Aputure Power Station is handy and can power up lights that don’t have a battery option. Just as long as the fixture has the right power pin configurations and matches up with the batteries used, it will work.
At $179, it’s a no-brainer to have in your kit, but something to keep in mind for those power-hungry lights, you will need high-capacity batteries to power them at full output, and those batteries are expensive. For example, a CORE SWX Hypercore XL 293wh costs $799, and you need two.

Power lights with batteries are great. It wasn’t possible during the tungsten days, and now with lower wattage LED fixtures, it opens up a lot of possibilities for remote location lighting. With battery capacity getting better quickly, it’s just going to keep getting cheaper with higher capacities.