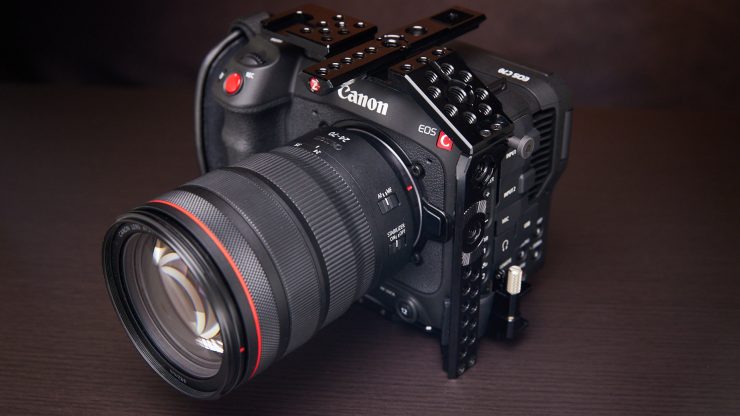 The Zacuto C70 cage is very light. It comes in at 8.9 oz / 252 g. When I first pulled it out of the box, I was surprised and thought something was missing. The design is not a full cage, and that helps a lot in weight. The parts are not as thick as some cages I have bought over the years, and I was a little skeptical if it would be rigid enough.
Once I installed it on the C70, it was plenty rigged and handled accessories with no issues. Nice work, Zacuto!

As you can see, the Zacuto C70 cage plays nicely with Zacuto’s ACT system kits and bits to create the camera setup that will work best for you.

The cage comes with an HDMI strain relief clamp. In the review kit, the right-angle HDMI adapter wasn’t included. Instead, a short HDMI cable that has an adjustable angle took its place. I personally would prefer the adapter, but they are inexpensive to buy.

To gain access to the port with the cage on the plastic cover should be completely removed. I got it to fit, but it took some wedging. The cover is easily removable without breaking the tab off. This is done by carefully pulling it out. Not to worry as the cover can be put back on when the cage isn’t in use. This might be an issue for some that want to keep the cage on all the time and shoot in dusty or wet conditions and want the cover on when not using the HDMI output.

A simple fix would be to buy some HDMI port covers like these for $5.45 US

On the bottom is a built-in Arca Swiss-style wedge plate that’s compatible with Zacuto’s ACT system and other Arca Swiss clamps. I like this a lot as I use the Arca Swiss QR plates on all my cameras and it’s much faster to put the cage on without having to attach another QR plate to the bottom.
The bottom plate also has three 1/4″-20 and one 3/8″-16 mounting holes. These come in handy for mounting quickly to a teleprompter or a gimbal sled. It’s all about having options.

The cage mounts into the top and bottom of the camera. The top slides into the cold shoe and uses the 1/4″-20 tap it has in the middle of the shoe. This is also used to mount the included handle of the C70.
On the bottom, the cage utilizes all three taps. One 3/8″-16 in the middle and two 1/4″-20 on each side. With the three mounting positions, the Zacuto C70 cage has a solid connection to the camera.
The top of the cage includes numerous 1/4″-20 holes for mounting accessories.

It also has a built-in Z-Rail (NATO) on the top and side for mounting an optional handle or other accessories and features Canon’s anti-twist grooves for mounting the C70’s included handle. This is great if you don’t want to invest in another handle. On the right side are a cold shoe and a bunch more tap. On the left, you get… yes more 1/4″-20 taps and the lovely Arri Assesory mount. Zacuto couldn’t have added more taps on this cage and having so many also makes the cage lighter.

The cage also features an M6 ARRI rosette on the side for a handgrip or other fancy rosette hardware and several 1/4″-20 taps, plus an ARRI anti-twist 3/8″-16 tap and the option to relocate the camera’s film plane screw to either side of the camera.

Zacuto has been making the Z-Finder for a long time as the loupe design makes it simple and cost-effective to add to an LCD screen as opposed to an EVF.

The Zacuto C70 Z-Finder is designed to be used with the Canon C70. The Z-Finder uses a 2.5x magnification and has a diopter range of -2 to +2 with the included Extender Frames. If you need more adjustment, you can use the included Extender Frames, or you can purchase drop-in diopters for even further diopter adjustment. The interchangeable anti-fog diopters, -1, +1, +2, +3 and +4, correct the focus.

The Z-Finder can be used independently of the camera cage. It securely mounts to the camera strap hook, which is built into the camera’s body, providing a solid mounting point. Attaching and removing the Z-Finder is as easy as turning a lever, flipping the latch, and sliding the Z-Finder on or off the LCD. It features foam padding so it will provide a light, tight seal and won’t scratch your camera’s LCD.

The unique design of the Z-Finder allows it to have a 135-degree range of motion when tilting up or down, letting you comfortably view the LCD when shooting in low mode or raised up over your head. The flip-open feature gives you easy access to the LCD’s touch screen.

The Z-Rail Rosette Mount $123.50 (not included) is a multi-functioning Z-Rail (NATO) rail mount. It consists of two pieces. One 1/4″-20 Rosette on a 15mm rail and a NATO clamp angled arm with a 15mm rail mount clamp. The top Z-Rail allows for the NATO clamp to be adjusted the length of the rail.

I tried it with my Gratical HD and it fits but is very tight with limited range due to its larger size. If the arm was longer and at a lesser angle, it would be more adjustable. An EVF like the Kameleon or Gratical Eye would be a better fit.

An Axis Micro or Axis Mini EVF could work better but you will need to add a 15mm rail mount to attach it to the cage.

I like the design of the cage as it doesn’t interfere with the buttons on the C70. The only two that come close are the White balance buttons as they are just above the HDMI lock.
The cage is very light, so if you are concerned with adding more weight you don’t have to with this one.

Having a cage on a compact video camera makes a lot of sense and the Zacuto C70 cage will give you plenty of options with so many 1/4″-20, and Arri Accessory mounts. Adding an EVF is doable on the top, plus if you have a handle that also has a 15mm rod holder you can easily add an Axis EVF kit and get the EVF off to the side more. Like all cages, it’s up to you to add the bits to make it work for you and with the Zacuto C70 cage, you can easily do just that.

The Zacuto C70 cage retails for $285.25 and is available for preorder.