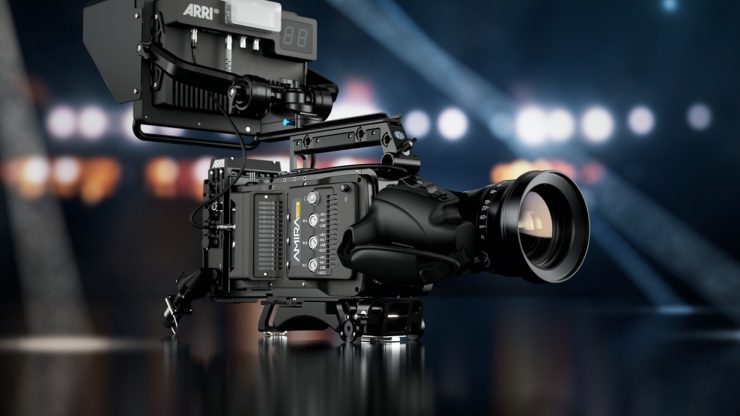 The ARRI AMIRA Live a new version of the AMIRA, which has been purpose-designed for multi-camera applications. Just to be clear this isn’t an AMIRA replacement, it is simply a new addition to ARRI’s lineup.

The AMIRA LIVE eliminates the need for external cabling between the camera body and the fiber adapter. This is meant to streamline and create a cleaner camera package that is better suited for live production environments.

Like other Super 35 format cinema cameras adapted for multi-camera broadcasting, the AMIRA previously required several external cables connecting the camera to the fiber backend for SMPTE 311M signal transmission. For live broadcasters, these cables created another link in the chain as there was always the chance of accidental disconnection or damage. Not only does the AMIRA Live remove these risks, but the cleaner camera configuration makes it a better solution for camera operators.

2/3” sensor cameras are typically used for multi-camera broadcasts. However, the AMIRA Live uses ARRI’s ALEV III Super 35 sensor, the same same sensor design as used in all ALEXA cameras. The whole idea behind the AMIRA Live is so users can broadcast live images on a par with high-end movies, TV series, and OTT productions. Now, this is not the first time S35 or larger-sized sensor cameras have been used in multicam productions. Companies such as Sony, Panasonic, and Blackmagic have their own solutions.

Another new component of the AMIRA Live package is ARRI’s VMM-1 monitor. This is a 10” onboard monitor that connects directly to the camera viewfinder interface or can be daisy-chained with the Camera Control Panel CCP-1. It includes controls for contrast, color, backlight, and peaking (including peaking on/off switch), a physical on/off switch for the frontside tally, and two camera user buttons. Accompanying the monitor is ARRI’s adjustable, quick-release Monitor Yoke Support MYS-1 bracket, designed specifically for the VMM-1 and for multi-camera setups.

The VMM-1 monitor will be available to purchase separately. It utilizes the viewfinder connection from the AMIRA or ALEXA Mini, but it can also be used as a stand alone monitor.

Along with the AMIRA LIVE, ARRI has also released the SUP 6.1 software update. Among its many refinements are improved noise reduction, increased sharpness settings range, better defect pixel correction, and faster boot-up. The update adds a green tally display to the viewfinder image and allows intercom talkback via the VTR or user button, facilitating easier communications when operating the camera from the shoulder.

SUP 6.1 also now means that no additional device is needed when using cforce RF motors to control the iris with the RCP (Remote Control Panel). This increases creative flexibility, opening up new looks by allowing the use of prime and zoom lenses designed for cinema productions with the same ease and workflow as traditional system camera lenses.

The AMIRA Live is available to order from today. The ARRI AMIRA Live Camera Set costs $31,180.00 USD. Now, this only includes the following;

The camera set does not include a viewfinder, lens mount our camera base mount, those need to be ordered separately, same as with the standard AMIRA camera set.

The Multicam Monitor bundle VMM-1 & MYS-1 retails for $5,980 USD. The VMM-1 connects directly to the camera viewfinder interface or daisy chained with the CCP-1. It includes a standard sunshade plus:

Prototypes have already been used on professional broadcasts with the arena-filling German magicians the Ehrlich Brothers, a television talkshow, as well as David Guetta Productions.

Above you can see some productions that were shot using the AMIRA Live cameras.