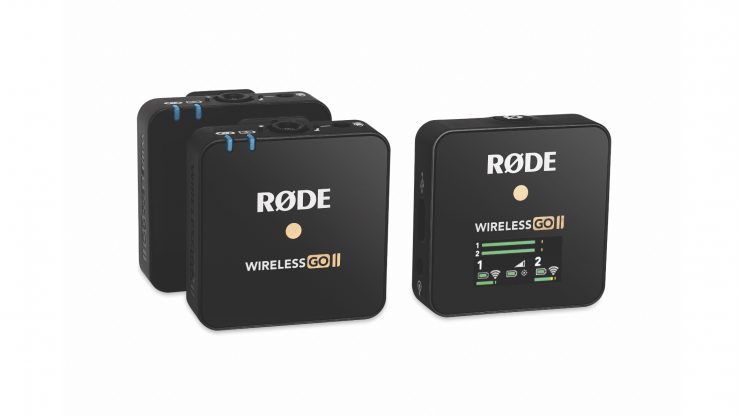 RØDE has announced the Wireless GO II, a follow-up to the very popular and widely used Wireless Go that was announced back in April 2019.

Over the last few years, we have seen countless imitations of the Wireless Go come to market from a wide array of manufacturers.

So what is new & improved & what is the same?

The Wireless GO II doesn’t stray too far from the original, and RØDE has kept the same pocket-sized form factor, but it has added a host of new features that have been implemented to make it a more capable and versatile product.

The transmitters and receiver feature the same clip design as the original. This also means the extensive range of Wireless GO accessories work with the Wireless GO II, including the Interview GO and MagClip GO.

So enough about what is the same, let’s see what is new.

So let’s dive a little deeper and go into all of these new features.

The Wireless Go II gets an all-new Series IV 2.4GHz digital transmission with 128-bit encryption. RØDE claims that this delivers an extended range of up to 200m / 656′ (line of sight). The original Wireless GO has a range of 70m / 230 feet.

This is a big increase in range and it will be interesting to see how the Wireless GO II performs over larger distances. One of the biggest problems with the original version was that the range was quite limited and you would inevitably start to get break up once you got within 20m of the maximum operating range.

RØDE also states that the Wireless GO been optimized for extremely stable operation in dense RF environments. The internal antenna has also been redesigned.

The Wireless GO II now features on-board recording capabilities. You can record over 24 hours of audio directly to each transmitter (without the need for an SD card) as a failsafe against dropouts and other audio issues. This is great feature especially for a wireless microphone system that works on the 2.4GHz frequency band.

RØDE gives you the option to switch between mono or stereo recording modes. This means you can record each channel separately or combine them for more flexibility later on.

It is important to note that this feature is activated via RØDE Central, a new app that gives users access to firmware updates and other features. More on that later.

The new RØDE Central app gives users complete control over all features and functions of the Wireless GO II. The VideoMic NTG, AI-1, and other microphones will be integrated into the app further down the track.

Now, the RØDE Central app currently isn’t available as an app for mobile devices. It only works with Mac and Windows computers. An iOS and an Android app will be coming eventually.

Flexible Gain Control- There is now more flexibility when it comes to gain control. A three-stage pad is expandable to a 10-stage pad. This makes adjusting levels a lot easier than just having the three-stage pad that was found on the original Wireless GO.

Safety Channel- A safety channel allows you to record a second channel at -20dB as a backup in case the main channel distorts. This is an extremely handy and useful feature to have.

Now, you need to be aware that both the 10-stage pad and the Safety Channel can only be accessed by using the RØDE Central App.

In-built rechargeable lithium-ion batteries – Not much as changed when it comes to the battery or battery life. Just like the original, the Wireless GO II gives you up to 7 hours battery life, plus a power saver mode.

Each Wireless GO II kit ships with a flat TRS memory cable for plugging into cameras and three USB-C to USB-A cables for connecting to computers for charging and recording (additional RØDE cables or adaptors are required for connecting to mobile devices and computers with USB-C inputs). There is also a handy carry pouch for keeping the kit tidy and secure.

The Wireless GO II is shipping worldwide now. The retail price is $299 USD.