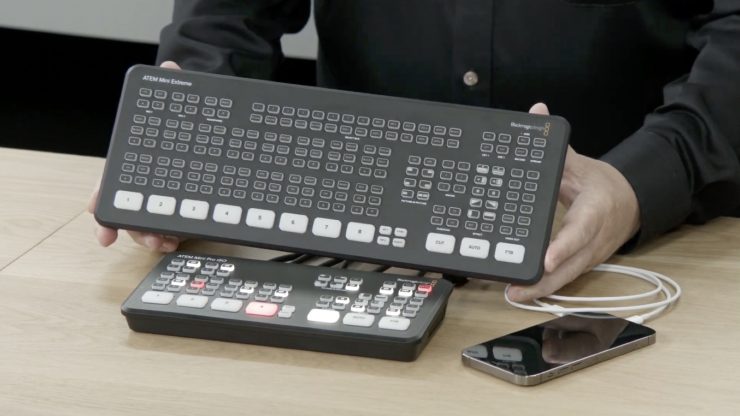 Blackmagic Design today announced ATEM Mini Extreme, a new larger model of the ATEM Mini live production switcher.
The new model features 8 inputs, 4 ATEM Advanced Chroma Keyers, a total of 6 independent DVEs, 2 media players, 2 downstream keyers, 16-way multiview, 2 USB connections and multiple HDMI aux outputs.
There is also a new ATEM Mini Extreme ISO model which includes all these powerful features plus a more powerful recording engine that can record all 8 inputs plus the program for a total of 9 streams of recording.
Both new models include a broadcast quality streaming engine for live streaming to YouTube, Facebook, Twitter and more.

ATEM Mini Pro and ATEM Mini Extreme models have a built in hardware streaming engine for live streaming via their ethernet connections. That means you can live stream to YouTube, Facebook and Twitch in better quality, without dropped frames and with simpler settings.
Select the streaming service and enter the streaming key. There are palettes in ATEM Software Control for streaming setup, plus streaming status is also displayed in the multiview. Streaming status is easy to understand as the data rate indicator shows internet speed required for the video format users are using. You can update the streaming profiles in an XML settings file to load new services.

Direct input for iPhone and Android

The ATEM Mini Pro and Extreme models support connecting an Apple or Android phone to the USB port to use mobile data. It can also be used as a backup for the main Ethernet connection.
Phone tethering works with the latest high speed 5G phones plus the more common 4G phones. The ATEM switcher will automatically detect when a phone is connected and switch its internet connection to use it, eliminating the need for changing settings. When connected, the phone will power from the USB port so it remains charged from the switcher.

The ISO models also save a DaVinci Resolve project file, so with a single click customers can open their live production as a video edit. All cuts, dissolves and media pool graphics will be loaded.
The DaVinci Resolve Sync Bin lets you select new shots via a multiview so it’s very easy to use. You can relink to Blackmagic RAW camera files as well.

With two independent 3.5mm stereo audio inputs, you can connect desktop and lapel microphones. With 2 extra stereo audio inputs, customers can ensure a host and guest both have lapel microphones when doing interviews. Plus all models feature a Fairlight audio mixer with all HDMI inputs and both microphone inputs are all connected to the audio mixer so customers can live mix from all audio sources. The ATEM Mini Extreme also adds a headphone output.

The front panel includes easy to use buttons for selecting sources, video effects and transitions. The source buttons are large so it’s possible to use it by feel. It also includes buttons for audio mixing.
On the ATEM Mini Pro and Extreme models you also get buttons for record and streaming control, as well as output selection buttons that let customers change the video output between cameras, program and multiview.

On the rear panel there are HDMI connections for cameras or computers, extra microphone inputs, USB for webcam out plus an HDMI “aux” output for program video.

Each of the HDMI inputs feature their own dedicated standards converter. The ATEM Mini will automatically convert 1080p, 1080i and 720p sources to the switcher video standard. The HDMI outputs are a true “aux” output so you can clean switch each HDMI input to the output. Plus the ATEM Mini Extreme models support 2 low latency direct loops. On the more powerful ATEM Mini Pro and ATEM Mini Extreme models, the HDMI output can be selected to display a full multiview.

The built in “media pool” allows the loading of up to 20 separate broadcast quality RGBA graphics for titles, opening plates and logos. You can even use still frames for complex effects such as graphic wipes. Graphics can be loaded via ATEM Software Control or downloaded directly from Photoshop using the ATEM Photoshop plug-in.

The ATEM Mini Extreme models include 4 upstream chroma keyers. With 4 independent chroma keyers, you get a keyer per camera so you can build a virtual set for up to 4 cameras.
It has 8 inputs, 4 to use for cameras and the other 4 can be connected to a virtual set computer for the rendered backgrounds. Yoiu can setup macros to change cameras and load the correct background into the media players. Or even use a DeckLink Quad HDMI and live virtual set software.