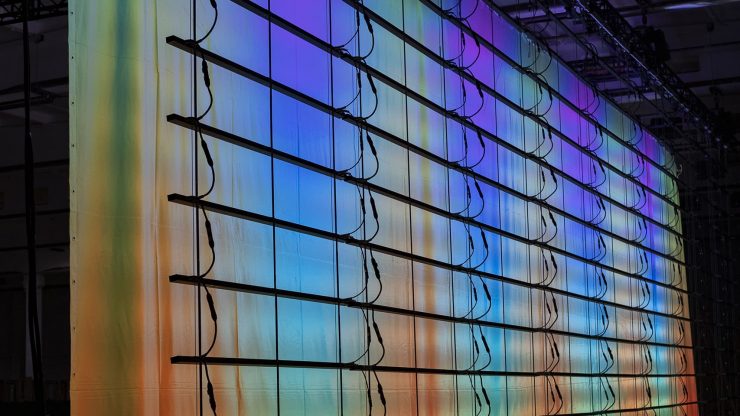 German lighting company SUMOLIGHT has announced SUMOSKY, which is meant to bridge the gap between static green screen & dynamic LED-displays.

You are probably already aware of the growing trend of using dynamic LED displays on big productions in place of traditional green or blue screens.

“The Mandalorian” used real-time, in-camera compositing which involves shooting on a stage in front of a structure that is referred to as the Volume. The Volume is a concave video wall that consists of 1,326 LED screens. By utilizing so many LED screens, real digital backgrounds can be created instead of having to go down the usual path of using green or blue screens.

These Volumes have proven to be very popular and over the past eighteen months, over a hundred virtual production studios have been built globally. The only caveat is that they are expensive and complex to set up. So what if there was something that bridges the gap between Volumes and traditional green/blue screens? Well, that is where SUMOSKY comes in.

So what exactly is SUMOSKY?

Basically, SUMOSKY is an instant expandable LED digital backdrop that was designed to save time and labor costs.

SUMOLIGHT has years of experience installing and illuminating painted backdrops, but they never found a solution that could project enough light, in the right color, and without any spill. They tried using extra lighting layers to create skylights, sunlight, or other types of motivated light. Unfortunately, all of those solutions took weeks to rig, increased costs in time and materials, and required too much studio space. To solve this problem, they created SUMOSKY.

The new SUMOSKY is a quickly riggable, slim, backlit, multicolored and versatile system that goes from neutral grey to green, blue, or any other color. Recreating skylights, night lights, sunsets or skydomes for stages is suddenly simple. When combined with harder sources, lighting effects are possible if doing process work in vehicles or fast-paced VFX work.

Essentially, SUMOSKY is a cheaper, simpler alternative to the full-immersion Unreal engine-style of video wall. It also works with traditional translight backdrops to enhance light or color changes, as well as Rosco Projection Screens and SoftDropsTM.

The SUMOSKY simply rolls out of a compact hard rolling case and can be hung in minutes with a very easy setup, allowing you to create your own desired large-scale digital canvas and backdrop.

The SUMOSKY has full RGBWW spectrum and claimed superior color rendering. Back-ground images and video can be projected and controlled by simply using SUMOLIGHT’s software on your laptop.

There is currently no indication of pricing, but I wouldn’t expect it to be anywhere in the realm of being affordable. This will most definitely be a rental item or an item bought for use in large studios.

SUMOLIGHT says that SUMOSKY is now being field-tested and will be available in Summer ‘21.