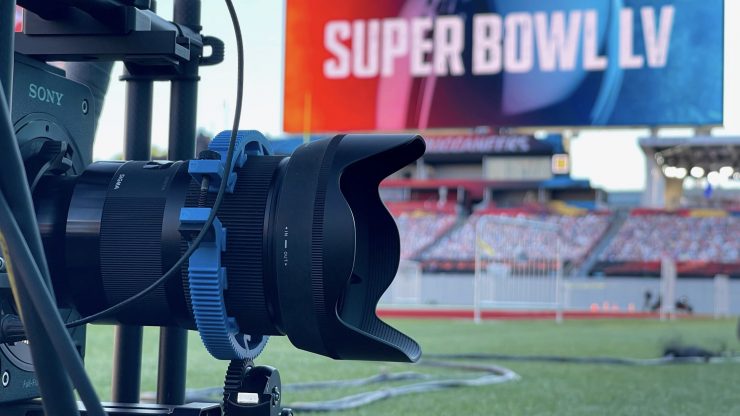 On Super Bowl Sunday Twitter seemed to have lost its mind (at least among camera nerds). Why? Well, because of the debate over whether there is a place for shallow depth of field or the use of large sensor cameras when watching live sports.

You may have seen on some recent NFL playoff games, including the Super Bowl, that CBS was using Sony VENICE cameras as part of the coverage. One of these was on a Steadicam and the other was on a Freefly Mōvi Pro. They also had a new Sony a1 as well.

Above you can see the VENICE being used after a touchdown at the Super Bowl.

Now, here is the shot from that same camera.

And now, here is a good example of why large-format sensors and shallow depth of field don’t work well for live sports.

It seems like CBS was trying to one-up FOX who was using a Sony a7IV on a DJI RS2. I personally thought the shot from this camera was very distracting and it didn’t cut in well with the rest of the coverage.

I don’t know why they wouldn’t just shoot in an S35 mode and drop the aperture down to say 5.6 or 8.

I personally don’t think a slow depth of field, large sensor camera has any place in live sports. It is just distracting, doesn’t cut in well with any of the other cameras and the shots are routinely out of focus. Why CBS was running an expensive VENICE with a Sigma stills lens and having the operator pull his own focus is beyond me. Why didn’t they just use a proper cine lens and have an AC pull focus?

Yeah I don’t understand. The signal is also highly compressed from those cameras. Looks very mushy, in addition to the focus issues. Hire good steadicam ops and good 1st ACs if you want it to look professional & worthy of a Super Bowl.

I wasn’t alone in the criticism of the shots. On Twitter, there was plenty of people voicing their opinions.

However, on the flip side, I doubt many regular viewers noticed or even cared. Above you read some of the positive comments that were posted on Twitter. The thing is, just because people in the industry didn’t like it, doesn’t mean that the fans didn’t. Everyone’s entitled to an opinion.

But, they got the half time right….well apart from the audio

The irony of this whole thing is, that in the same exact Super Bowl, the halftime performance by the Weekend was entirely done live using ARRI S35 cameras with people actually nailing the focus and keeping the depth of field suitable for a live broadcast. Whether you liked the half time show or not is another thing entirely, but at least it was in focus.

The shot of the Weeknd waking through the mirror maze was done using an ARRI Amira, an 8mm Zeiss/ARRI Master Prime rectilinear lens.

Once the singer made it down to the football field, the vertical color bleed effects were achieved by using streak filters to shoot the masked dancers’ LED accessories.

What are your thoughts on the use of shallow depth of field and large sensor cameras for live sports? Let us know in the comments section below.