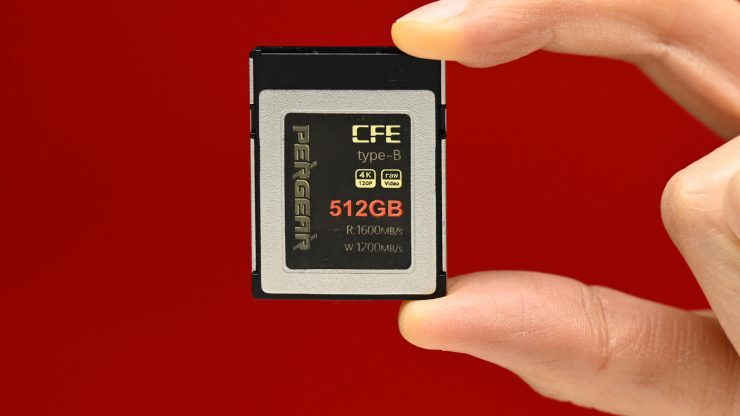 CFexpress cards are still relatively new and higher capacity versions can be expensive.

CFX-B series CFexpress enables 8K RAW continuous shooting and video recording for future premium DSLR, Mirrorless and video cameras. With the design of PCIe Gen3 interface, the fastest cards can provide speeds of up to 1730 MB/s read and 1550 MB/s write, which is over 3 times faster than the best CFast 2.0 and XQD cards.

CFexpress cards can be found in capacities up to 2TB. 512GB capacity cards tend to be the most popular.

So when I mounted the 512GB CFexpress card it shows the actual capacity as being 512.04GB. Given the RED Mini Mag controversy, it is good to know that you are getting what is being advertised.

I also got someone to check the capacity of the SanDisk 512GB CFexpress card. That card also only has 476GB of capacity (3GB are used for structure).

According to PERGEAR the 512GB card is compatible with the following cameras:

In theory, the speeds offered by the PERGEAR CFexpress Type-B 512GB Memory Card certainly makes it capable of recording 8K RAW material from the Canon R5 without breaking a sweat.

Above you can see the card requirement speeds listed by Canon for recording 8K on the R5.

In cameras such as the Nikon Z6 and Z7 that only feature a single lane PCIe 2.0 interface, the camera can only read and write to CFexpress cards at throttled down speeds that are similar to what you would already get with an XQD card. As these cameras don’t even use the full write speed capabilities of XQD cards, CFexpress won’t offer any increased in-camera performance.

Not Backwards Compatible with XQD

I did a few tests to see what the sustained read/write speeds of the PERGEAR CFexpress card was and also how fast I could offload material through a USB-C card reader to an ultra-fast SSD. I also did the same tests with an XQD card.

Above you can see the results for the PERGEAR card with the stress set to 5GB.

Above you can see the results for the PERGEAR card with the stress set to 1GB.

As a comparison, above you can see the read/write speeds using Blackmagic Disk Speed Test for the Wise 512GB CFexpress card.

It was interesting to see that the results I obtained during this test were not as high as I was expecting. In saying that, it is still fast enough to be able to record 8K RAW from the Canon R5.

I tested the card out with the Canon R5 and set the camera to record 8K RAW.

The card worked without any issues and I was able to record 8K RAW without encountering and problems.

In fact, the card kept recording for 26 minutes and 6 seconds and it only stopped because the card became full.

A heat warning came on after 24 minutes, but the camera continued to record until it ran out of memory.

I also tried some real-world tests with the Nikon Z6 where I started recording and then turned the power off. The files were saved and I didn’t lose any footage. With the Z6 if you pull the card out while you are recording it doesn’t save any of the last clip.

The PERGEAR 512GB CFexpress Type B card retails for $329 USD. In the US you can purchase it here.

As you can see, the PERGEAR 512GB card is the cheapest 512GB option available. Now, you may be thinking that maybe the card won’t be as reliable as other options because it is a lot cheaper, however, PERGEAR offers a 5-year warranty where they will replace your card if it fails.

The card has a listed working temperature of 0° C ~ 70° C and a
storage temperature of -25° C ~ 85° C. I am a bit concerned that the lowest operating temperature is only listed as 0° C which could make it unsuitable for use in some countries in winter. However, the inside of most cameras gets fairly warm quite quickly once they are turned on.

If you own a Canon C500 Mark II, C300 Mark III, or R5, the PERGEAR CFexpress cards are certainly an affordable option. However, you need to be aware that they are not the fastest cards out there and the actual read/write speeds I was able to obtain were considerably lower than cards such as the Wise 512Gb CFexpress.

Despite the lower speeds, the card worked flawlessly on the Canon R5 and it can record 8K RAW and 4K HQ without any issues at all. This makes it by far the most affordable 512GB CFexpress Type B card to be able to do so.

If you are using CFexpress Type B cards with a Canon C500 Mark II or an R5 to record high-resolution RAW files, you are going to need quite a few of these cards to get you through a day!