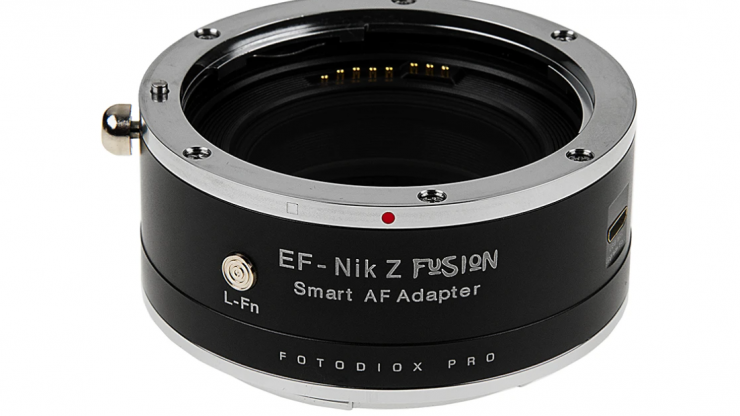 The Fotodiox FUSION Canon EF to Nikon Z Adapter allows you to have full autofocus and aperture control when using Canon EF lenses on any Nikon Z mount camera.

Nikon Z’s short flange focal distance of 16mm allows for just about any other lens to be adapted and used on Nikon Z mount cameras.

Along with autofocus and aperture control, the FUSION EF to Z adapter also supports image stabilization from select Canon EF mount lenses that utilize it.

The FUSION EF to Z adapter comes with a chrome-plated brass mounts and leaf springs on the Canon EF side. These features are claimed to offer a secure fit and less wear on the camera mount and lens bayonet. The adapter also features an all-metal housing.

Future firmware updates can be installed via the Micro USB port found on the barrel of the adapter. This gives uses the ability to update functionality and expand compatibility as new Nikon cameras and firmware are released.

The FUSION EF to Z adapter also has an L-Fn (function button). This button comes standard with most Nikon cameras from the F line, and is also available on lenses from the Z line. This allows the user to set a custom setting that can then be accessed by pressing the button.

According to Fotodiox, the autofocus speed is quite fast on the adapter with AF-C and AF-F being able to be used reliably for both video and photography. While it isn’t going to be as fast as using native Z mount lenses or Nikon lenses using the FTZ adapter, it should still be usable as long as your expectations aren’t sky high.

Fotodiox also claims that the adapter does not degrade image quality as it doesn’t feature any optics. Canon EF lenses will provide full frame coverage The adapter has been loaded with the Canon lens library which means the adapter is able to recognize any EF or EF-S lens licensed by Canon. However, please be aware that some third-party lenses may not be recognized or may not have full functionality.