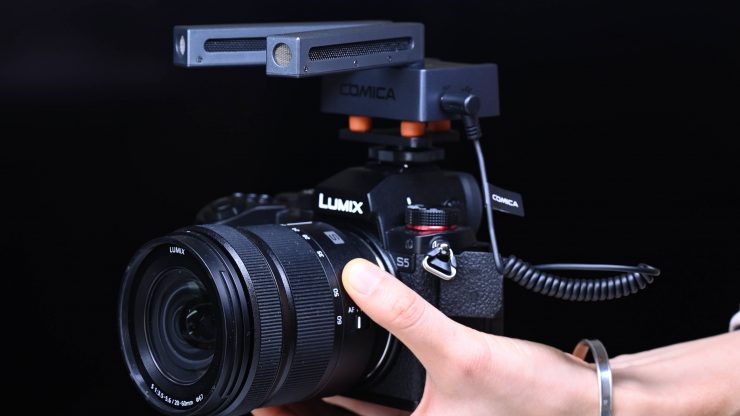 The COMICA Traxshot is a super cardioid transformable all-in-one Shotgun microphone. It has been designed to be an affordable and versatile on-camera microphone solution for DSLR, mirrorless cameras, and smartphones.

This does make it quite lite, which is good if you using it on a smaller sized camera.

I was surprised by the COMICA Traxshot’s build quality. It is actually solidly made. The buttons and dials are nice and tactile and nothing about the product feels flimsy or cheap.

The Traxshot features a cold shoe mount that also has a 1/4 20″ thread in the bottom of it. This allows you to mount the microphone in a variety of ways.

The Traxshot has a nice sized IPS screen that clearly shows you information about the microphone and allows you to see what changes are being made.

There aren’t any complicated menus you need to navigate. The display also shows you a clear graphic representation of what operating mode you are using.

The only slightly confusing aspect is that even though the display shows you what operational mode is selected, you still need to physically move the microphones to the correct position.

It would have been nice if COMICA had have implemented a system where the operating mode automatically changes when you move the microphones. This would avoid some possible confusion for users.

The COMICA Traxshot has switchable operating modes that you can select from. These modes are:

The whole concept behind having these various modes is so you can tailor the microphone to your needs. Changing from mono to stereo, to different degree angles, as well as being able to record audio from both in front and behind the microphone makes it nice and versatile.

The Traxshot features a built-in rechargeable lithium battery. COMICA claims that the microphone has a standby time of up to 20 hours. They don’t officially list operational time. I found that I could easily get through a whole day without needing to charge it.

You charge the Traxshot through the USB-C port and it takes around 3 hours to fully charge it. The USB-C port can also be used for firmware updates.

This seems to work reasonably well, however, I would be worried about how long these will last before they get worn out. The rubber donuts look like they are user-replaceable and I would have liked to have seen COMICA include a spare set.

This is what you get in the kit:

The two included windscreens are nicely made and they fit onto the Traxshot snuggly.

It is nice that the Traxshot features a headphone out. This is a handy feature to have if you are using the mic with a camera that doesn’t have a headphone jack.

It is also very useful if you are using the microphone with a smartphone or tablet.

If your camera does have a headphone out jack then you could actually plug something in like a Rode Wireless GO and use the Traxshot as a wireless microphone solution. This is something I probably wouldn’t personally do, but in a pinch, you could do it in an emergency.

I didn’t find the quality of the signal coming out of the headphone jack to be that great and you can’t adjust the level. Above you can listen to a test I did where I took the headphone out signal from the Traxshot and fed it into a RODE Wireless GO TX unit. I then recorded the output of the RODE Wireless GO RX on a Nikon Z6. I haven’t adjusted anything.

The Traxshot is easy to use and it lets you get on with shooting. Once you have it plugged in and set up there is not much you need to do.

The audio quality is going to depend somewhat on the camera you are using it with. Some cameras have better pre-amps than others. I tested the Traxshot out with the Panasonic S5 and S1H.

I found the best practice was to set the input level on your camera as low as possible and then adjust the output gain on the Traxshot.

Like a lot of affordable on-camera microphones, the audio quality is ok, but not great. For picking up ambient sound it works fairly well, but again, like a lot of on-board camera mics, it isn’t the best for dialogue.

I like how you can set the microphone up in various ways to record sound. Being able to adjust the angles of the microphones is handy, especially for recording ambient sounds.

Above you can hear a test that was recorded in a normal room where I am around 12″ from the microphone. I also did a test with the RODE VideoMic NTG so you can get some type of comparison. I haven’t altered the audio in any way. This is exactly how it was recorded on the Panasonic S1H.

In the Mono Mode and 30° Stereo Mode the Trackshot sounds fairly similar. Once you move to the 90° X/Y Stereo Mode you then can notice a big difference.

The audio is pretty decent from the Trackshot, but in my opinion, the RODE VideoMic NTG sounds a lot better.

The low cut feature does work pretty well, you just want to make sure that you don’t have it activated when you are shooting in non-noisy environments because it does make the microphone sound very thin.

The COMICA Trackshot retails for $179 USD. You can currently get 5% by using the Code: KHF6FNUU

If you happen to be in Canada it is available for $235 CAD.

Competition could arguably come from something like a DEITY V-Mic D4 Duo Microphone. While not the same, the DEITY can record audio from both in front and behind where it is mounted.

You could also argue that another low-cost competitor would be something like the Tascam TM-2X X-Y Pattern Stereo Cardioid Microphone.

The COMICA Trackshot is well made and easy to use. The audio quality is decent for the price, but it won’t be as good as more expensive offerings like a RODE VideoMic NTG. Anytime you set out to make a product that is being designed to do a variety of tasks then there will always be compromises you need to make.

It is often the case that you pay for what you get and at $179 USD the Trackshot offers a reasonable balance of performance, versatility, and price.