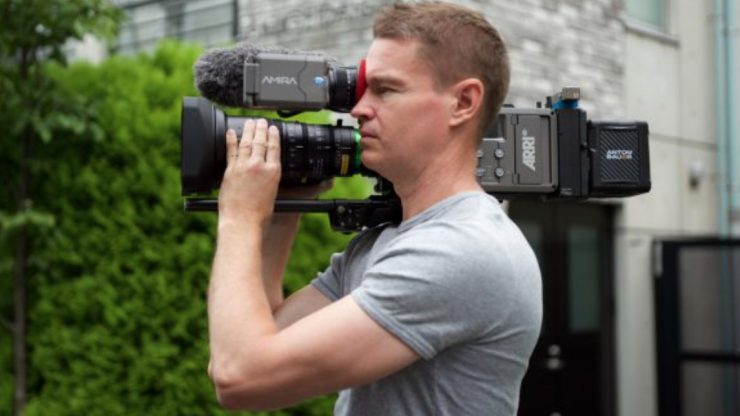 Digital cinema camera form factor can leave a lot to be desired, especially if you want to shoulder mount your camera without having to turn it into a frankenrig.

There are good reasons why 2/3″ B4 mount ENG/EFP cameras feature a form factor that hasn’t changed in decades. This form factor works really well for shoulder-mount shooting and you have a self-contained solution that doesn’t need to be built-up to work. You attach a battery and a lens and you are ready to shoot. So why haven’t we seen more cameras with S35 sized sensors being built with this type of design? That is a good question.

The only digital cinema cameras to come out in the last 10 years that vaguely resemble this form factor have been the ARRI Amira, and arguably the Panasonic Varicam 35 and Varicam LT, as well as the Canon C700. Sure, you could argue that cameras such as the Sony F5/F55 sort of met this criteria, but they were a lot smaller in length and height. You could also make a point that the Blackmagic URSA Mini Pro series goes some way towards meeting the criteria.

To get a good balance on the shoulder, and still have access to key controls, a camera needs to be a certain size and form factor. In a lot of cases with smaller sized cameras, the camera body ends up way behind the user. You also have to add counterweight to the back to obtain the correct balance.

What people have traditionally done is to take a camera that doesn’t work out of the box and build-it up to essentially create something that almost resembles the same form factor as a traditional ENG/EFP camera. We have seen people do this with just about every camera that has come out in the last 10 years.

Sony never really got this form factor right with their original S35 digital cinema cameras like the SRW-9000PL and F35. Why Sony couldn’t just put an HDCAM SR recorder directly into the camera body instead of having to use gigantic external decks still remains a mystery. It was probably due to heat, size, and a variety of other technical reasons.

The only true S35 shoulder mountable solution to come out that was close to fitting the bill was the Ikagami HDK-97ARRI that was announced in 2013. However, just like the Sony cameras I previously mentioned, the Ikegami couldn’t record internally either.

Above you can see our interview and a first look at the camera at NAB 2013.

What was really unique about the Ikagami HDK-97ARRI is that it actually featured the exact same ALEV III sensor that is still found in a lot of ARRI’s current cameras. It also featured a PL mount that could be swapped out for a B4 broadcast mount.

Ikagami was certainly onto something here, and we will never know how popular the camera could have been if it had have been capable of recording internally.

Along with the shoulder mountable form factor, ARRI sensor, and PL mount, the HDK-97ARRI had built-in ND filters and you could use a proper EVF.

While not being able to record internally, the camera did have a High Band 3G Transmission System. This fiber transmission system utilized 3G in both directions, camera head to CCU/BS and CCU/BS to the camera head, and it supported dual-rate formats such as 1080/23.98p 4:4:4 and
1080/59.94p 4:2:2 formats. There were also two HD-SDI output signals (1.5G) are selectable among Camera, VF, RET and MON (monitor) for external monitoring at the camera head.

The camera could also take advantage of BS-98/CCU-980 rack-mountable fiber transmission units. This allowed the camera to supply 4K ultra HD and 3G/HD-SDI outputs simultaneously. Hold on, 4K UHD? Ikagami was using a process that they refer to as “Super Resolution with non-linear processing” to reconstruct high-resolution signals. Essentially it was just doing an upconvert in a very similar way to what ARRI now does internally with the AMIRA and ALEXA Mini.

In a lot of ways, the Ikagami HDK-97ARRI could very have been the inspiration behind the AMIRA.

So that brings me back to the question, why haven’t we seen more digital cinema cameras that have the same form factor as a traditional ENG/EFP camera? It isn’t like there is no market for cameras like this. Look at how many ENG/EFP shooters have transitioned to Super35 or larger sensor cameras only to try and build them up to resemble and work in the same way as cameras they were used to using.

ARRI did basically do this with the AMIRA, but why hasn’t someone else like Sony done it? Sony has a wealth of experience in making ENG/EFP cameras and they could easily put an S35 or full frame sensor in an ENG/EFP style body.

Look, I’m not for one second suggesting that all digital cinema cameras should have this type of form factor, but there is definitely a lot of shooters out there who come from broadcast backgrounds who would like a camera with a proper out of the box shoulder mountable form factor, proper viewfinder, familiar controls, and the same sensors and features that are available in some of the currently available cameras.

There is a gap in the market where a F5/F55 replacement could very well take on this form factor and be targeted more at higher-end broadcast and EFP work. I wouldn’t expect a camera like this to be cheap, it would probably have to retail for around $20,000 USD.

What are your thoughts? Is a shoulder mountable, use it straight out of the box digital cinema camera with a similar form factor to traditional ENG/EFP cameras something you would be interested in? Let us know in the comments section below.