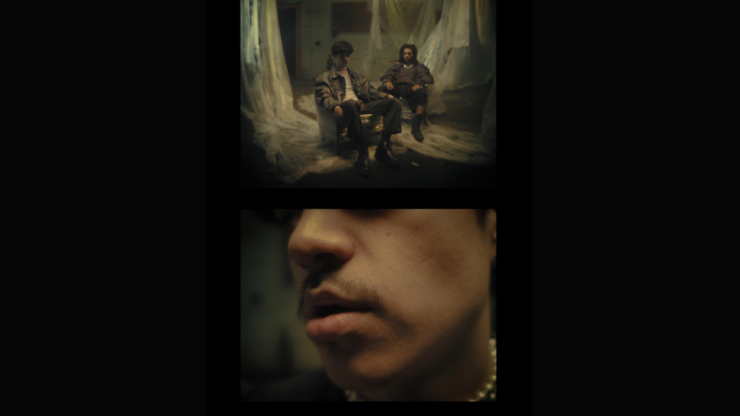 LOWERLIPDRIP is a contemporary hip-hop duo based out of Chicago, composed of members blackrobeBLACKROBES and Dew Haydn. The two are known for their music’s cybernated influences and challenging traditional identities of masculinity.

The past few months, the COVID-19 epidemic has caused major upheavals in all facets of life: social, professional and personal. For film production, everything in progress was put on hold until further notice and all prospective shoots pushed indefinitely or canceled with no foreseeable return.

For DOP Art Parnitudom who spends a majority of his time on set and is usually surrounded by dozens or even hundreds of people, this put him in a tough spot, and he watched my projects disappear one by one. In October he finally got back on his first set, so he wanted to create something special.

Art’s work is rooted in the world of narrative filmmaking, therefore the perspective he lends toward any project as a cinematographer is first driven by the story, its pacing and its characters.

This is how he decides on the construction of the visual environment the characters are to inhabit, from the tools he chooses, the post-processing of the captured footage, to how the scenes are light/shoot.

Contrary to what some people think, there is no ‘best’ camera, as they are just tools, and different tools are meant for different purposes.

With that being said, Art wanted to revisit the desire of creating an extremely unique visual language and style for LOWERLIPDRIP in the ‘Flawless’ video. The camera choice was chosen specifically to allow his crew to achieve the look that they wanted to capture.

The music video was shot on a Sony CineAlta F35; to this day, this is still one of the most expensive digital cinema camera sensors to have entered the market at a whopping $250,000 USD. Although only 213 units were manufactured, the camera is quite accessible today.

Let me elaborate. The importance of this lies in the fact that the camera super-samples the color information: two photo sites of red, green and blue are combined to form one singular pixel. The 5,760 horizontal pixels are crammed into 1920 boxes, and the 2,160 into 1,080, resulting in 3x more information horizontally and 2x vertically.

This means that you acquire true color fidelity and true RGB information, unlike the Bayer pattern filter method that uses to guess the surrounding colors to a pixel, resulting in strange neighboring color pixels when blown up in post-production. This effect by Bayer pattern filters can also reduce the overall resolution of the image.

The F35 is able to create an extremely ‘thick’ image that Art has not been able to find in other contemporary counterparts. He decided this would be the perfect imaging plane to begin constructing the look of the video, as the more contamination and degradation introduced, the more decadent the crew could build their visual style to complement the song.

One of the most unique parts of this music video is not the camera, but the optics you decide to shoot with.

The project was shot on Art’s custom set of Canon SE high-speed lenses. These lenses were originally made in 1960 by Canon, and were affixed in front of 35mm rangefinder film camera bodies—some permanently attached to their camera bodies. They were made to shoot 35mm stills and were not designed nor considered for use in cinematography.

So, why did Art make this choice?

In 2016, Art re-visited film photography again after a few years off. He picked a Canonet QL-17 due to the focal length and its lens speed, 45mm f/1.7. That camera was perfect…until he lost it on a trip to Peru. Fast forward one year from then and Art felt extremely frustrated because he was not able to shoot any photos, digital or stills, that could evoke the feelings he felt using the Canonet.

This led Art to his first re-housing of the lens, which later became a full four focal length set. The lenses offer a perfect balance of aberration to milkiness, which gives a sense of heightened-naturalism.

At this time, Canon also utilized rare-earth elements in their optical coatings. This is no longer legal in modern lens manufacturing, which makes the optics mildly radioactive (yet still safe as it’s so minimal), but gives it that extra spice to the image.

On top of that, Art affixed a prototype of what he has come to call the ‘p/rt optical ABERRATOR’ in front of the lens. You can clearly see the spatial smear and depth this optical attachment adds and creates to give a mildly Impressionistic feeling. This Aberrator also allows extreme close focus due to partially utilizing a macro optic in the optical chain.

As you can tell, arriving at this style feels somewhat roundabout. There is something to be said about this method, which Art found himself drawn to. In contaminating the pristine sensor with retro optics compounded by a home-brew prototype he was able to arrive at an almost surreal, impressionistic, smeary visual style.

The modern obsession with quantitative technical specs in cinematography is helpful, but it fails to consider the direct implications of ‘how does this image feel?’—dynamic range or not.

Cinematography is a craft that is highly technical but ultimately rooted in emotion. After all, you are setting out to build a world to draw people in and evoke some kind of reaction. So, Art found no benefit in the obsession with numbers, specs and new equipment that arise every day—it’s important to know the tools at your disposal, but they do not substitute the work you put in.

if you’d like to see other works by Art Parnitudom you can visit:

Isabel Crabtree is a freelance culture journalist based in Brooklyn, New York. Her reporting focuses on music, film and the relationship between art and economics. To read more of her work, including bylines in Esquire, Loud & Quiet, Level and more, please visit http://www.isabelcrabtree.com/.