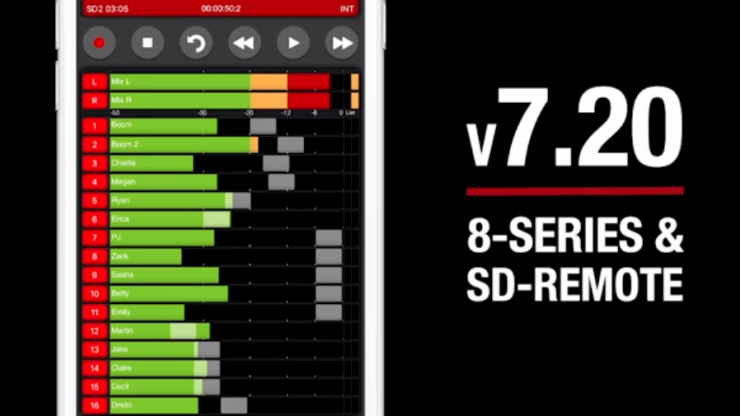 Sound Devices has announced firmware version 7.20 for their 8-Series mixer-recorders, as well as a companion app SD-Remote. Firmware v7.20 supports this new SD-Remote for iPhone and the recently released four-instance and eight-instance versions of the NoiseAssist plugin for 8-Series.

It is good to see that Sound Devices continues to bring out new firmware on a fairly constant basis for a lot of its products.

SD-Remote, the companion app for 8-Series mixer-recorders, allows for remote control of faders, trim, pan, transport controls, metadata, monitoring, and more. These features, combined with a simple interface, make SD-Remote a good solution for dealing with any social distancing protocols on set. Previously available for iPad and Android tablets, version 7.20 brings SD-Remote to any iPhone model running iOS 12 or higher. iPhone users may download SD-Remote for iPhone by visiting the Apple App Store on their compatible device.

The 8-Series became the first portable mixer-recorders with the option for built-in noise suppression when the two-instance version of NoiseAssist for 8-Series was released earlier in May. Now with a four-instance and eight-instance version also available for purchase on the Sound Devices online store, it is possible to run NoiseAssist on up to 8 isolated channels, or a combination of isolated channels and buses. The NoiseAssist algorithm is ideal for ultra-light mobile setups where a fast turnaround time is paramount.

The plugin is available for purchase at store.sounddevices.com. Customers who already purchased 2 instances of NoiseAssist for their device will receive an automatic discount when upgrading to 4 or 8 instances on the same device.

Prior to v7.20, NoiseAssist could only run on Bus L and Bus R. With this new firmware upgrade, instances of NoiseAssist can now be applied to any bus in addition to any isolated channel.

Additionally, with v7.20, SD-Remote now offers a False Take function, and trim gains can now be grouped together.

8-Series users may view the full list of changes and upgrade to v7.20 by visiting the Sound Devices Downloads Page at www.sounddevices.com/download.