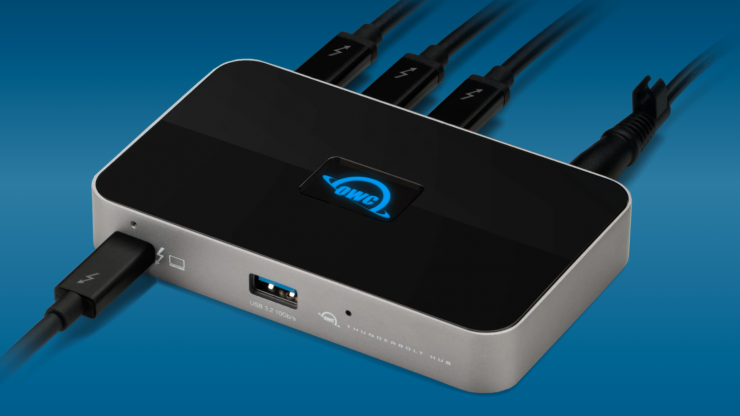 The OWC Thunderbolt Hub’s four Thunderbolt (USB-C) ports and one USB port let you add a lot of connectivity to Apple M1 Macs, Apple Intel Macs with Thunderbolt 3, or any Thunderbolt 4 PC.

You can connect and charge nearly anything via the hub through a single port on any Thunderbolt-equipped Mac or PC. This includes Dual displays up to 4K, or one 5K/6K/8K display, high-performance storage including NVMe solutions, A/V mixers, a phone or tablet, or even desktop accessories like a keyboard or mouse.

In a nice touch, you connect multiple bus-powered drives directly to the OWC Thunderbolt Hub without any loss of performance and speed.

With daisy chains, removing any device other than the last one will break the chain and disconnect devices until you reconnect them. The OWC Thunderbolt Hub lets you create three separate “tree branch” chains, so you can remove devices from one chain without affecting or disconnecting the others. You can even add three bus-powered Thunderbolt devices.

The OWC Thunderbolt Hub will retail for $149.99 USD and it is expected to start shipping in early December.

Have you bought or are you thinking about purchasing a new Apple M1 laptop? Let us know in the comments section below.