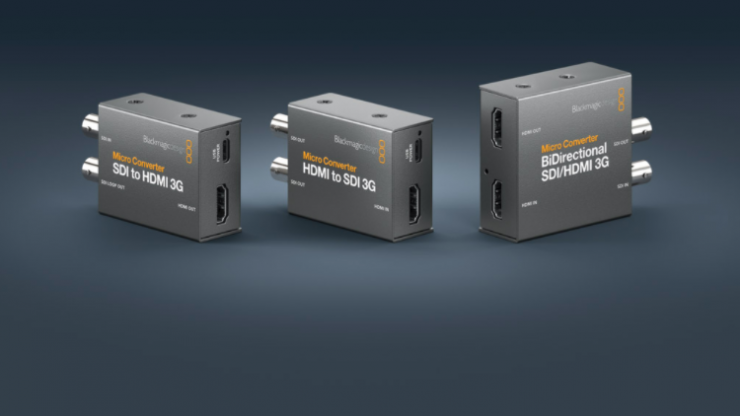 The new Blackmagic Micro Converter 3G models are small and compact broadcast video converters that let you connect and convert HDMI to SDI and vice versa.

Blackmagic Micro Converters work with both 8 and 10-bit video formats, in RGB or YUV, and in all SD and HD formats up to 1080p60. You also get fully embedded audio and timecode support.

Blackmagic Micro Converters include a USB connection for power, as well as changing settings via the converter utility on Mac and Windows. Because the USB powers the converter, you can even power it from televisions or laptop computers. There are even LEDs for power and video status. You can also buy Blackmagic Micro Converters with an AC power supply including 4 adapters for international use.

Blackmagic claims that this is the world’s smallest bidirectional broadcast quality converter. It allows you to convert SDI to HDMI and at the same time HDMI to SDI, both in different formats. It also supports camera control protocol conversion, so you can use BMPCCs with SDI live production switchers.

You can change settings and update the converter software with the free converter utility that can be downloaded from the Blackmagic Design web site. This software connects to the USB connection on the Micro Converters and runs on both Mac and Windows computers. You can use the utility to change the converter name, which can be useful for identifying which converter is used for which task. When using the bidirectional converter, you can even set the camera number, so the converter knows when it’s being controlled from a live production switcher. You can also select between level A and level B on the 3G-SDI video output.

The Micro Converter SDI to HDMI 3G model includes a 3D LUT for color-accurate monitoring. This allows you to custom looks, color and gamma changes in real-time for on-set monitoring. LUTs can also be applied to the 3G‑SDI loop output, allowing you to use the converter as a 3D LUT processor. You can also use 3D LUTs to get a color calibrated grading monitor using a low-cost computer monitor or TV. By using the DaVinci Resolve primary color corrector you can create looks and then save them as custom 3D LUTs.

The new Micro Converter BiDirectional SDI/HDMI 3G model supports camera control so you can use a Blackmagic Pocket Cinema Camera with an ATEM SDI switcher. ATEM switchers send camera control over SDI, and the converter can translate this to HDMI for the camera.

The new Micro Converter 3G models include support for HDMI and SDI timecode conversion. You can even get full support for timecode in both standard definition and high definition video formats. If you have any HDMI device that supports timecode, you can convert it to SDI and get that timecode into larger broadcast systems.

The Blackmagic Micro Converter 3G Models are now available for the following prices: