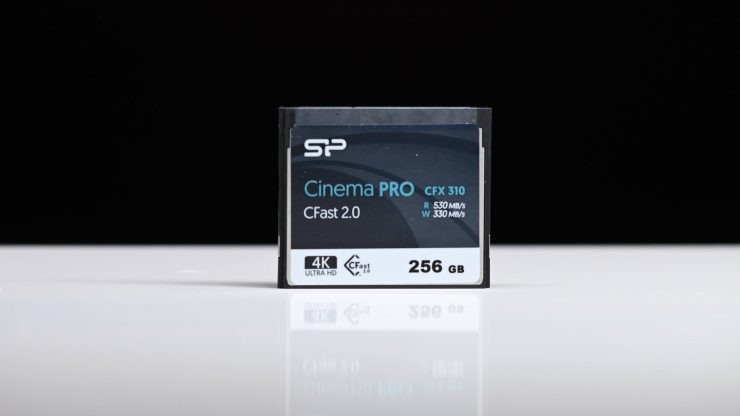 The Silicon Power Cinema PRO CFX 310 CFast 2.0 Memory Cards are budget-friendly options if you are looking for CFast 2.0 cards for your camera.

Who is Silicon Power?

It is likely that you may have never heard of Silicon Power (SP) before. Silicon Power is a Taiwanese company that was founded back in 2003 and since that time they have become a leading manufacturer of flash memory cards, USB flash drives, portable hard drives, solid state drives, DRAM modules, and industrial-grade products. They have their own production site in Taipei.

What cameras will it work with?

Despite some of the newer cameras now utilizing faster cards like CFexpress, there is still quite a lot of cameras out there that are still using CFast 2.0.

PLEASE NOTE THAT JUST BECAUSE A CARD HASNT BEEN OFFICIALLY APPROVED BY A MANUFACTURER DOESN’T MEAN IT WON’T WORK.

The prices of CFast 2.0 cards have certainly come down in recent years, and the capacities have also gone up. With cameras now recording in higher resolutions and at higher data rates, purchasing larger capacity cards makes more sense. I personally prefer using CFast 2.0 cards that are either 256GB or 512GB in capacity. I find that 128GB cards don’t have enough capacity for most of my needs.

So when I mounted the 256GB CFast 2.0 card it showed the actual capacity as being 255.2GB. This shows that you are essentially getting what is advertised.

I did a few tests to see what the sustained read/write speeds of the Silicon Power 256GB Cinema PRO CFX 310 and also how fast I could offload material through a Thunderbolt 3 card reader to an ultra-fast SSD.

Above you can see the read/write speeds using Blackmagic Disk Speed Test for the card. These speeds were slightly less than the advertised max read/write speeds, but it is usually hard to ever see max figures doing a test like this.

I also tried some real-world tests with the BMPCC 6K where I started recording and then turned the power off. The files were saved and I didn’t lose any footage.

I didn’t have any problems recording BRAW 6K at 3:1 using the card.

These prices make them a very affordable option if you are looking for CFast 2.0 cards.

The cards do come in three different capacities as I have already mentioned, but let’s concentrate on how the 512GB version stacks up against the competition.

Here is how other available 512GB CFast 2.0 cards compare to the Silicon Power:

As you can see the prices and read/write speeds of CFast 2.0 cards are quite varied. The Silicon Power 512GB Cinema PRO CFX 310 card is the most affordable option by a considerable margin, however, its max. write speed is lower than most of the other cards. This is not going to be a concern when used with a lot of cameras.

The Silicon Power Cinema PRO CFX 310 cards work as advertised and that is about all you can ask of a memory card. Reviewing media cards is difficult because I can’t test for long term reliability over many years.

It is good to see that the card comes with a 3-year warranty and it has a lot of very positive reviews from buyers who have bought the card and used it in various cameras.

If you are looking for a good quality CFast 2.0 card that is very affordable, the Silicon Power PRO CFX 310 CFast 2.0 Memory Cards are hard to overlook.