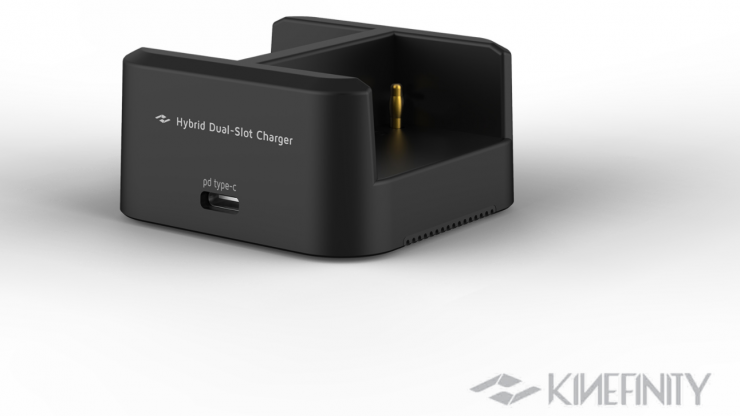 Kinefinty has a new Hybrid PD Dual-Slot Charger available. It is a compact USB-C PD charger that allows you to charge either Sony NP-F style batteries or Sony BP-U style batteries.

This charger was first teased when Kinefinity unveiled the MAVO Edge 8K camera back in April this year.

Because of its hybrid design, you can do any of the following:

The Hybrid PD Dual-Slot Charger is nice and small and it features a modern design.

It weighs in at just 61g (2.15 oz) and it can fit in the palm of your hand. This makes it a great option for anyone who is traveling and wants to save space and keep the weight of their kit to a minimum.

The charger comes with a USB-C cable and a small AC wall charger, but you can choose to purchase it without the AC wall charger if you don’t need it.

It has charging indicator LEDs that you can clearly see for both batteries.

You need to clearly know that the charger will charge a single battery faster than if you trying to charge two at the same time. The max. charge current when charging a single battery is 3000mA, if you are charging two it drops to 2000mA.

The charger can charge two 52Wh GripBAT 4S batteries to 80% in only 90 minutes, which is 2-4 times faster than most conventional chargers. This is good if you are on location as you can charge batteries quite quickly if you are starting to run out.

Because the chargers are so small, you could buy a few of them and plug them into power outlets and charge all the batteries that you use at once.

The Kinefinity Hybrid PD Dual-Slot Charger is available with or without the 65W PD Power Adapter. It is now available to purchase and here are the prices:

The Kinefinity Hybrid PD Dual-Slot Charger works as advertised. It is nice and small and lightweight which makes it perfect for anyone who is traveling.

If you need to change both BP-U and NP-F batteries then this charger makes a lot of sense.