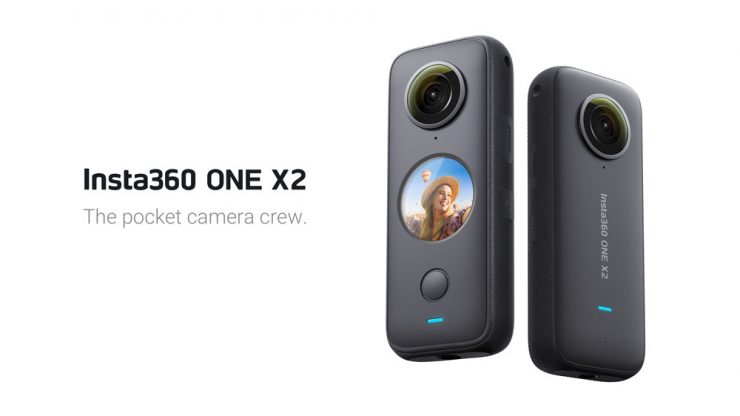 Insta360 has announced the new ONE X2 camera, the successor to the original ONE X.

It looks similar to the original ONE X but now has a full colour screen on the front whereas the original only had a mono status screen.

Improved hardware all around

The Insta360 ONE X2 doesn’t make any massive jumps in resolution capabilities, keeping a maximum 5.7K in 360 but makes a few key hardware changes.

The battery now has a higher capacity at 1630mAh, compared to only 1050mAh of the original for a claimed 80 minutes of shooting time.

The front of the unit now houses a colour touchscreen where you can preview your 360-degree footage, typically this required viewing on a paired smartphone or tablet.

It also now uses a USB Type-C connection, rather than the microUSB.

360 mode captures up to 5.7K with both lenses, with the ability to publish 360-degree videos, or traditional 16:9 footage with the freedom to recompose the shot in post.

Steady Cam mode records at a maximum of 50fps at 2560×1440 using a single camera with an ultra-wide view, stabilsed using Insta360’s FlowState stabilization.

InstaPano is a brand-new photo mode for capturing panoramas. They are taken instantly and don’t require the user to move the camera to take multiple exposures for stitching.

MultiView is designed for vlogging, displaying two angles at once with different fields of view with app face tracking.

Select your target with a tap or voice command while shooting. Then head to the app or Studio, where the upgraded Deep Track algorithm can track humans, animals and other moving objects, keeping your target center-frame, no matter the obstacle.

PureShot mode enhances the dynamic range of your low-light photos, while reducing noise and preserving detail.

AquaVision auto-balances out colors, resulting in underwater content that looks like it was shot in daylight without any external filters.

Almost like a yo-yo, the new Bullet Time Cord mounts to the ONE X2 and has a retractable cord that you use to swing the camera around. Using a cord makes it much more compact than the typical selfie sticks.

Like most cameras, you can now stream directly to streaming platforms. One neat feature with the ONE X2 is the ability to stream a split-screen view using both cameras.

A selection of new accessories are also available including Lens Guards and a Bullet Time Cord for capturing slow-mo angles.