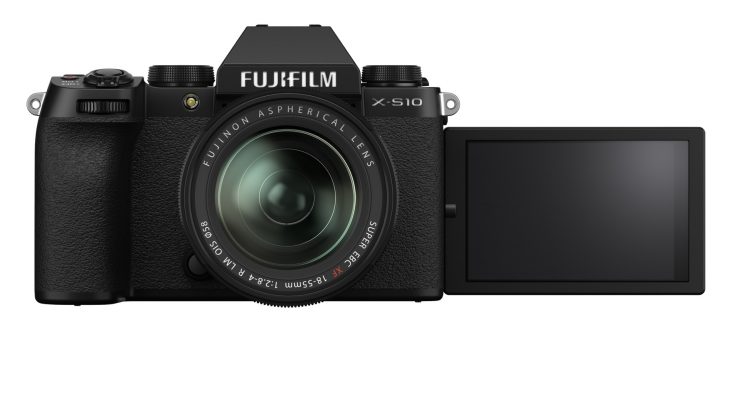 Fujifilm releases a compact S35 camera with the X-S10. While it has a lot of nice features it doesn’t replace the X-T4. Think of it as a compact version with a few lesser features, such as for video no 10bit internal, but it does offer 10bit 4:2:2 externally via HDMI.

Fujifilm states the X-S10 is designed for people that want a lightweight camera with professional features for both photo and video. The popular AUTO/SP (Scene Position) Mode automatically adjusts camera settings to produce quality images without the need to make fine adjustments to image settings. The advanced video capabilities can either produce sharp 4K/30P 4:2:2 10-bit video or high-speed full-HD video at 240fps, and the vari-angle LCD screen can also be flipped forward 180 degrees, giving everyone from photographers and filmmakers to vloggers and hobbyists.

The X-S10 has an all-new, smaller IBIS system to go along with its compact body. The camera’s IBIS mechanism is approximately 30% smaller in volume and weight than the X Series model. The X-S10 delivers up to 6.0-stops of five-axis image stabilization. It is also the first mid-range X Series camera to use a motion sensor retention mechanism, which is a mechanical shock absorber that guards against slight vibrations that may come from the shutter unit.

While compact the X-S10 features a large, ergonomic magnesium- alloy grip, making it easy to keep the camera stable when large lenses are mounted. The design also features a magnesium-alloy front and top-plate to keep the body rigid.

X-S10 generates 4K video from the amount of data equivalent to 6K to ensure the footage is in high resolution with low noise. It supports recording 4K/30p 4:2:0 8-bit video onto an SD card inserted in the camera, and outputting 4K/30p 4:2:2 10-bit video via the HDMI port. The X-S10 camera is capable of high-speed full-HD recording at 240fps.

In addition to X-S10’s IBIS, the camera also has Digital Image Stabilization (DIS) mode to compensate for camera shake. Adding IS Mode Boost provides even more stabilization, nearly eliminating camera shake when it is used from a fixed, hand-held position.

With a dedicated movie recording button on its top-plate, X-S10 lets users start recording video even when the camera is set to stills mode. It will also automatically set exposure and focus settings if the camera is in an AUTO shooting mode. (The AF mode automatically switches to Continuous AF in these instances).

We are seeing more articulating screens on a Fujifilm camera! While the X-T3 with its tilt screen is useful the truly flippy screen on the X-T4 was a welcome upgrade. It’s what the people want and they now have it. The vari-angle LCD monitor can rotate up to 180 degrees, making it useful not only for selfies but also for stills and videos taken from various camera positions.

The popular Film Simulation Modes were created to celebrate the history of photographic film by digitizing some of the industry’s most iconic Fujifilm analog films. X-S10 features 18 Film Simulation Modes, including ETERNA Bleach Bypass, which creates a desaturated, high-contrast look.

To complement these Film Simulation Modes, X-S10 also offers an updated [AUTO / SP (Scene Position)] mode that automatically adjusts shooting settings to the given scene, without the need to make further, fine adjustments in Settings. Photographing landscapes with clarity and vivid colors, making portraits with beautiful skin tones, and creating evenly-balanced images in back-lit conditions are possible, regardless of skill level.

The X- TransTM CMOS 4 sensor’s 2.16 million phase detection pixels and X-Processor 4’s computing power provides quick and accurate autofocus for achieving focus in as fast as 0.02 seconds in some cases, even at -7.0 EV.
X-S10 is equipped with high-precision Tracking AF for moving subjects and Face/Eye AF function to track a subject’s face and eyes. It offers blackout-free, high-speed burst shooting of 30fps with the electronic shutter and 8fps when using the mechanical shutter.

The FUJIFILM XF 10-24mm f/4 R OIS WR is a versatile wide-angle zoom now featuring robust weather sealing along with more intuitive handling. This 15-36mm-equivalent zoom has a constant f/4 maximum aperture and advanced optics, which utilize a series of extra-low dispersion and aspherical elements to correct both chromatic and spherical aberrations for high color accuracy, sharpness, and accurate rendering.

A Super EBC coating also suppresses flare and ghosting for improved contrast and color neutrality when working in strong lighting conditions. An updated optical image stabilization system minimizes the appearance of camera shake by 3.5 stops for improved sharpness when shooting handheld and a stepping motor offers quick and quiet autofocus performance. The lens has a reworked physical design that includes a slimmer focusing and aperture rings, a lockable ‘A’ position, and f/stop scale, and the lens a dust- and moisture-sealed design for working in harsh environments.

The new camera looks good and a nice companion to the X-T3 or X-T4 for situations where you want to carry less but not sacrifice too much. It’s nice to have a small body that uses all the same lenses you already have if you are in the Fujifilm X mount ecosystem. Yes, internal 10bit would have been nice but for $999 you have to expect less. I do like the camera has IBIS as this opens up all the great smaller non IS lenses Fujifilm has. I personally love the 23mm and 55mm F2. So compact and sharp but no IS. With the X-S10 it would be a very nice set.