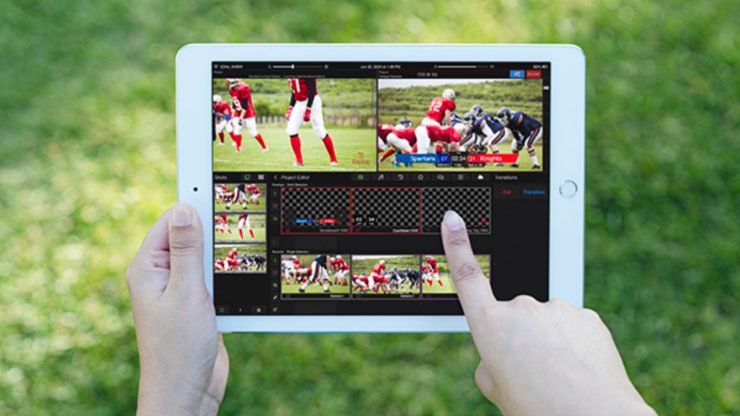 Teradek formally had products such as Live:Air Solo – YouTube Live.

Airmix is an app that you download from the iOS store. You use it in conjunction with your basic single or multi-camera live production set-up. Essentially, Airmix turns your iOS device into a video switcher, making it a good solution for streaming.

You can broadcast to multiple platforms simultaneously, such as Facebook, YouTube, and Periscope. You could use Airmix to stream any type of event for any purpose you like.

Airmix allows you to insert custom graphics, text, and customizable lower-thirds. You can also use a range of transitions, animations, and scaling options. These tools allow you to personalize your livestream by bringing in your own logos or content from web-based links and PowerPoint presentations. You can also use a chromakey (green screen) function if you want to use a different background.

For anyone streaming sporting events, Airmix lets your viewers re-watch plays throughout your broadcast in Instant Replay.

You can also break down particular plays in detail using Slow Motion. Airmix also features a built-in sports timer and a set of custom scoreboards.

Airmix supports up to ten video sources, with the ability to switch between iOS cameras and other cameras like DSLR’s and camcorders with Teradek encoders, plus pre-recorded video and audio files.

The Airmix apps can use external video cameras as a streaming source when they are combined with a compatible Teradek encoder.

This includes sports/action cameras such as GoPro or Replay XD, consumer- or professional-level camcorders, or Digital SLR / DSLR cameras.

NOTE: DSLR cameras are not typically recommended for live event production — refer to this article for additional information.

The following are required to use an external camera as a source:

Capture your event without an internet connection and stream it later

Control levels and set parameters for each video source

See what your audience is saying by adding YouTube, Twitch, and Facebook chat to your live broadcast

Bring Powerpoint presentations into your live stream through PDF support

Now, while the app may be free you do need an optional Teradek Core or Sharelink account for multi-platform streaming.

The Airmix Remote and Airmix Solo apps can only stream to a single destination at a time.

For example, a single stream can be sent to Facebook Live, YouTube Live, Livestream, Ustream, Wowza Streaming Engine, or your own RTMP server.

Streaming to multiple destinations simultaneously requires a subscription to the Teradek Core service.

When used with Core, the app can send multiple RTMP or MPEG-TS streams simultaneously by way of the Core-controlled Sputnik server.

Teradek offers three different versions of Airmix. There is Airmix Remote which you download for free from the iOS app store. There is Airmix solo which is for use with iPhones, and there is Airmix. Airmix is the fully-featured suite of production tools. It costs $29.99 USD/ month. Teradek does offer a 30-day free trial.

Airmix does look like an interesting solution, however, you need to factor in the cost of a subscription-based system, plus the cost of a Teradek Core or Sharelink account, and the associated equipment that is also required for streaming.