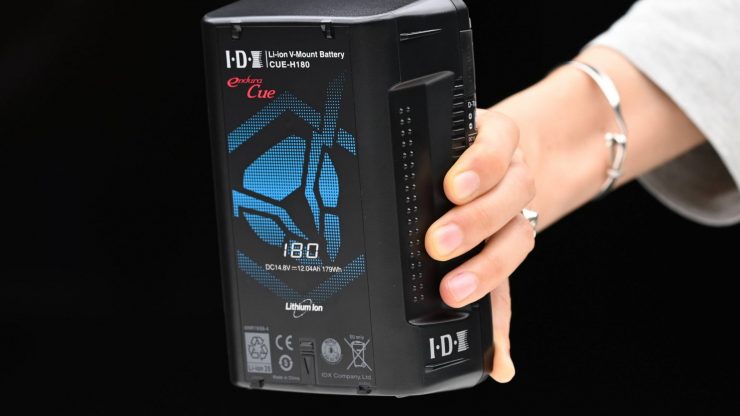 The CUE-D series has been around for the last 6 years and it was due for a refresh. The CUE-H series doesn’t fundamentally change the concept of the CUE-D series, it is more of a modern redesign to make it more relevant in 2020.

The CUE-H series, just like the CUE-D series is being targeted at low budget customers who are perhaps buying V-lock batteries for the first time.

Batteries are not overly exciting and in a lot of ways, we take them for granted. Without batteries, you can’t power cameras or other accessories remotely. They are a key component of everything we do in this industry. I’m constantly amazed at people who will buy an expensive digital cinema camera and then purchase the cheapest battery they can possibly buy. You wouldn’t put cheap tires on a sports car, but people don’t blink twice about using cheap batteries on an expensive camera.

While there are a lot of relatively new companies making battery solutions, IDX has over 30 years of expertise in battery manufacturing and they were one of the pioneers of Li‐ion technology.

Where do the Lithium-Ion Cells come from?

Al IDX batteries are manufactured by one of the world’s premier suppliers of Lithium-Ion cells. There are only a handful of companies that actually make Lithium-Ion cells, but you should be aware that not all Lithium-ion cells are of equal quality. IDX is using the highest grade Lithium-Ion cells that in the CUE-H series.

Rated at 134Wh, the CUE‐H135 meets the power demands of digital cinematography and broadcast cameras where high current loads of 10.5A/135W are needed.

The CUE-H batteries ae solidly made and I don’t have concerns over build quality.

They have small little tactile bumps on both sides which helps you handle the batteries if they have any moisture o them or if you are wearing gloves.

What I like about IDX V-lock batteries is they seem to attach a lot more securely to v-mount plates that some other battery brands. I’m not sure why this is, but it is just an observation I have made.

The D-tap power output is also nicely designed and it is very easy to put a D-tap cable in and to take it back out. I have found a lot of batteries over the ears where the D-tap output was badly manufactured and it was hard to place a D-tap cable into the outlet.

In a nice touch, there are two different QR codes on the batteries themselves. One takes you to the instruction manual and the other goes to a page that shows you the batteries air safe transportation certification. If you have ever had to deal with security at airports who don’t know a lot about lithium-ion batteries, this comes in very handy.

On the very bottom of the battery is a place where you can write the date when the battery was first charged. IDX has had this on their batteries for decades and it allows you to know exactly when that battery went into service.

These may all sound like small things, but it shows me that IDX has paid attention to small details when designing these new batteries.

How does the weight compare to some other competing 90Wh batteries that are on the market?

IDX has included an improved D‐Tap connection capable of taking an 80W load (compared to 50W for previous CUE‐D series). While this is an impressive load, all of the batteries only come with a single D-tap output. I would have preferred to have seen at least two D-tap outputs as well as either a USB or USB-C power output as well. A lot of new batteries coming to market have a lot of outputs.

Now, I reached out to ask IDX to ask why there was only a single D-tap output on the batteries and they told me that ‘most users don’t use more than a single D-tap and that they rarely use the USB/USB-C ports during shoots. Also, a lot of battery plates that re being sold already have these outputs on them.’

All CUE‐H batteries are IATA‐compliant (excluding the CUE‐H180) so you can legally hand carry them onto flights.

If you are after smaller sized batteries, IDX also has the Imicro Series which are completely different from the CUE-H series. They are available in a 97Wh version (Imicro-98) and a 145Wh version (Imicro-150). Both batteries have dual D-tap outputs.

These batteries are extremely small and lightweight.

Here are the prices of the batteries:

So how does the price of the CUE-H90 compare to some of the competition?

As you can see, the price of the IDX CUE-H batteries is very competitive.

There is nothing glitzy or glamorous about the IDX CUE-H series, but they are solid, well made, affordable, and well-designed batteries that go about their job with a minimum of fuss. From my experience over the years, I have found IDX batteries to be reliable and dependable. I have used IDX batteries for decades, especially when I was working for television networks. All most all of the networks I worked for used IDX batteries.

My only complaint would be that I wish there were more power outlets on the batteries. Having only a single D-tap output seems a little antiquated in 2020.