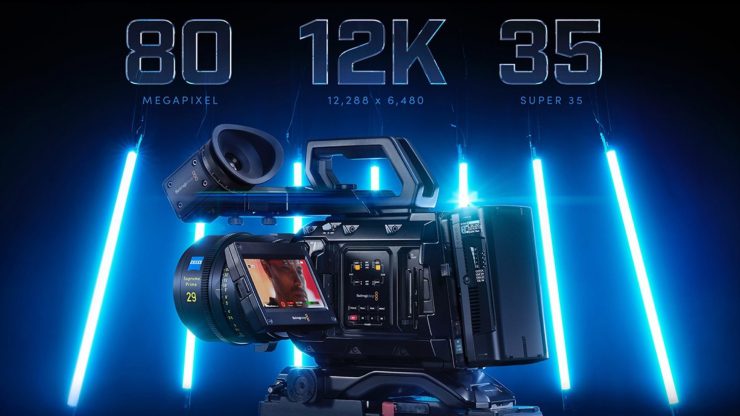 You can shoot at 60 fps in 12K, 110 fps in 8K, and up to 220 fps in 4K Super 16. URSA Mini Pro 12K features an interchangeable PL mount, as well as built-in ND filters, dual CFast and UHS‑II SD card recorders, a SuperSpeed USB‑C expansion port. DaVinci Resolve Studio is included.

The new 12K sensor has equal amounts of red, green and blue pixels and is optimized for images at multiple resolutions. You can shoot 12K at 60 fps or use in-sensor scaling to allow 8K or 4K RAW at up to 110 fps without cropping or changing your field of view. The new 12K sensor was designed around using 12-bit BRAW.

If you want a lot more information on the sensor Matt talks about it in his URSA Mini Pro 12K Thoughts article.

BRAW records at a constant bitrate with encoding options of 5:1, 8:1, 12:1, and the new 18:1 are designed to give you the best possible images with predictable and consistent file size.

It seems that the URSA Mini Pro 12K doesn’t support internal codecs other than BRAW. This could be problematic if you don’t want to use Blackmagic’s Raw offerings.

The only other option would be an external recorder for non BRAW, but the camera only sends UHD, so you can’t get 12K or 8K externally. Only UHD. As for 12K capture, I think this does make sense since BMD is pushing the S35 sensor pretty hard, and recording a 12K signal has to be efficient.

If you want to play around with some 12K footage you can download a few clips from Blackmagic Design.
Clip 1
Clip 2
Clip 3

You will have the latest version of DaVinci Resolve to open these files.

With big files, you would probably like to record externally and BMD knows this. The new URSA Mini Recorder lets you record 12-bit Blackmagic RAW files onto fast 2.5-inch SSDs, including the latest U.2 NVMe Enterprise SSDs. SSDs such as the latest 7mm U.2 NVMe disks are super fast, delivering data transfer speeds of up to 900 MB/s. This fast performance gives you longer recording times for full-resolution 4K, 8K and 12K 12-bit Blackmagic RAW files in the highest quality Q0 encoding.

The Blackmagic URSA Mini Recorder attaches directly to the back of the URSA Mini Pro between the camera and the battery. It’s controlled via the USB-C, so you don’t have to worry about manually starting or stopping the SSD recorder.

Another recording option is the Dual Card recording for 12K. The resolution is spanned onto two cards and then put together in Davinci Resolve. If an issue happens with one of the cards BMD states the software will scale the image down to 4K so you don’t lose the footage. Sounds pretty cool!

In the demo, Grant shows several 12K streams in a multi-clip editing situation with all the streams playing back in realtime. While this is possible with a high powered machine Blackmagic Design states you don’t have to have the best of the best computers to edit 12K. This is very subjective as computer configurations vary a lot from user to user.

It looks like a very interesting camera for those that need a lot of resolution for 8K delivery. I do like how BMD goes into a different direction and offers something no one else is. It surely separated them from the pack.

What do you think about the URSA Mini Pro 12K? Do you think 8K delivery is going to be big enough to support 12K cameras?

If you want more information about the new URSA Mini Pro 12K camera Matt has written up an opinion piece that you can read.