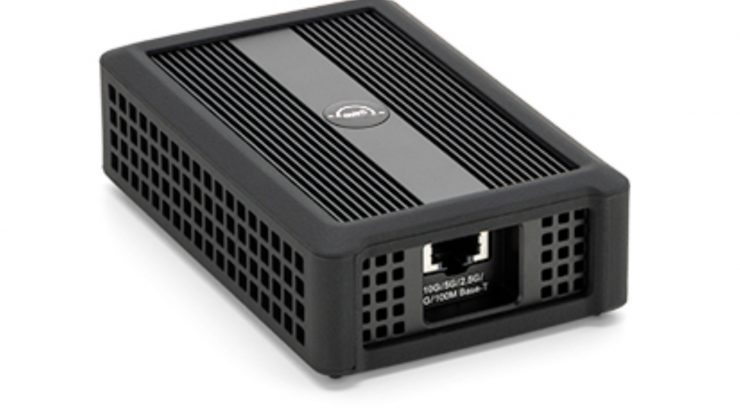 The OWC Thunderbolt 3 10G Ethernet Adapter adds up to 10Gb/s Ethernet connectivity to Thunderbolt 3-equipped computers that lack built-in capabilities. If you’re a video editor or creative pro, you can use this adapter to get extremely fast transfer speeds with signal reliability and stability.

An adapter like this can help speed up transfers on older Thunderbolt 3-equipped laptops that lack built-in Ethernet connectivity and desktop machines handcuffed by a built-in 1Gb/s Ethernet port like the iMac 2017, Mac mini 2018, and some PCs.

The OWC Thunderbolt 3 10G Ethernet Adapter offers claimed real-world speeds of over 900MB/s. This allows you to transfer a 50GB file in under a minute, perform video editing, and live stream gaming sessions.

With the adapter you can access 10GBASE-T 10Gb Ethernet networks and other devices, such as a Network Attached Storage (NAS) system, to transfer large multimedia files in just seconds. You could quickly set up multiple laptops and desktops that lack built-in 10Gb Ethernet ports and share material in a team environment to speed up workflows. This would give multiple editing workstations the bandwidth needed for sharing and editing data-intensive creative content like video, animation, and graphics. Editing can then take place directly from files on a shared RAID storage device or NAS.

The adapter is also backwards compatible with other Ethernet standards including 5GBASE-T, 2.5GBASE-T, 1000BASE-T, and 100BASE-T.

The adopter features a ventilated design that is claimed to maximize airflow. An aluminum housing works as a heat sink to operate silently cool without needing a fan. The adapter draws its power from the Thunderbolt 3 port with Energy-Efficient Ethernet support for low computer-power use and no AC adapter needed. OWC also provides a rubber sleeve to keep the adapter safe from scratches and dents when taken on the road.

The OWC Thunderbolt 3 10G Ethernet Adapter is now shipping for an introductory price of $149 USD.