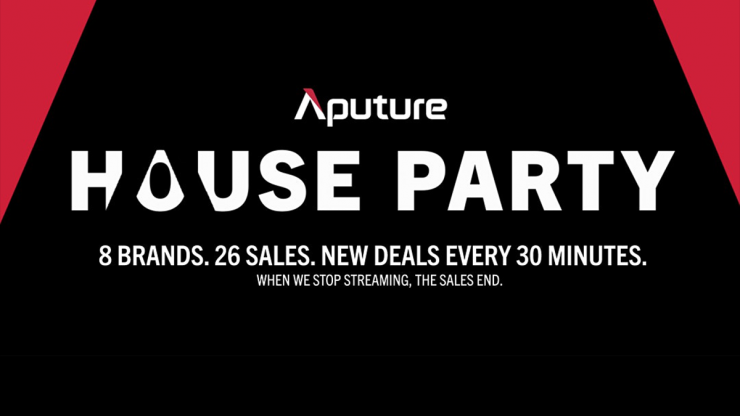 Aputure House Party is a collaboration with Aputure’s best friends, and you’re invited! Join as they play host to an array of time-sensitive sales, from a diverse range of products every filmmaker should have in their kit. Quasar Science, DOP Choice, Chimera, Matthews Studio Equipment, ROSCO, K-Tek, and Deity Microphones are all attending as House Partiers; granting you access to exclusive House Party deals!

These flash sales will only be announced on the stream so you must be watching live to participate.

Attending the Aputure House Party is simple: tune-into the Aputure Youtube or Facebook [Official Page] on June 25th from 10:00 am to 3:00 pm (PST) and watch as each sale is revealed! But act fast — as with all flash sale events, these jaw-dropping deals will not last for more than 30 minutes each! The House Party deals are open to everyone worldwide.

Hosted by Aputure President Ted Sim, the Aputure House Party will also feature Ambassadors from your favorite cinema manufacturing companies, as well as surprise appearances by creatives and experts from the online filmmaking community!

Our broadcast is live from Los Angeles — but you can tune-in from anywhere on the planet.

Additionally: In an effort to give-back during these unprecedented times, Aputure is proud to contribute a percentage of all Aputure Sales towards Feed The Freelancers, an NYC foundation established to support our film industry financially affected by COVID-19.

Mark your calendars. Tell your friends. The House Party is on.

A percentage of all Aputure Sales will go directly to Feed The Freelancers! Feed the Freelancers, a charity initiative led by out-of-work film crew members is delivering free grocery boxes to non-union freelancers who have become unemployed amidst the COVID-19 pandemic. This charity effort provides wholesome food to hundreds of people each week, most of whom are not currently being served by government or private relief programs. Isabella Olaguera, Feed the Freelancers’ founder and CEO, is a non-union freelancer in the film industry.

Isabella stresses the importance of supporting freelancers in a time when nonessential work is halted. “Film shoots are shut down. Restaurants are closed. Events are canceled. Companies are conserving their resources and keeping work in-house rather than hiring freelancers. Because of this lack of opportunity, freelancers are struggling to make ends meet,” Olaguera stated. Lightbulb Grip & Electric Co, a film equipment rental house in Brooklyn, is FTF’s flagship packing site and operations headquarters.

Adam Richlin, Lightbulb’s rental house manager, acts as its Site Leader. He is one of many industry professionals on FTF’s volunteer team who are retooling their film skill-sets to help the freelance community. FTF is also partnered with nonprofit organization F.E.E.L (Film & Entertainment Emergency Logistics), who provides its dispatch team for deliveries.