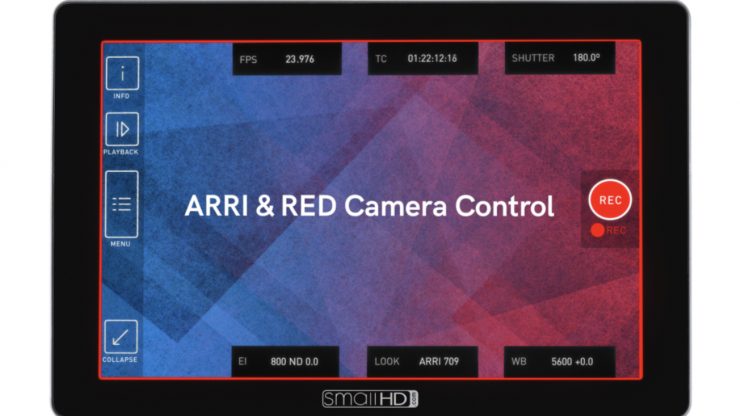 SmallHD Cine7 monitors will now ship with RED and/or ARRI camera control for free. Not only did camera control used to cost an additional $500 USD but SmallHD has also lowered the price of Cine 7 monitor kits.

I will put a list of all the deals at the end of this article.

The Cine 7 monitors feature a 1080p display with daylight viewable 1,800 nit display that offers 100% coverage of the DCI-P3 color gamut.

The Cine 7 has dual 3G SDI inputs as well as an HDMI input and loop out. Power is delivered via locking two-pin power connector (10-34V DC, 2A in) or battery bracket using Sony NP-F style batteries. There are also Gold Mount and V-Mount battery plates available separately.

Not only does the Cine 7 have a nice display, but the monitor can also directly control both ARRI and RED cinema cameras. There was supposed to be support coming for select Sony cameras but that is yet to happen.

The Camera Control Menu appears as an overlay on the video feed once assigned to a Page. Each Page gives the user quick access to sets of tools (framing, exposure, focus, etc). Operators can toggle from Page to Page via the highly responsive touchscreen interface.

The Cine 7 has an ethernet port which is used to communicate with a compatible camera.

If you want to see how the camera control works there is a video below.