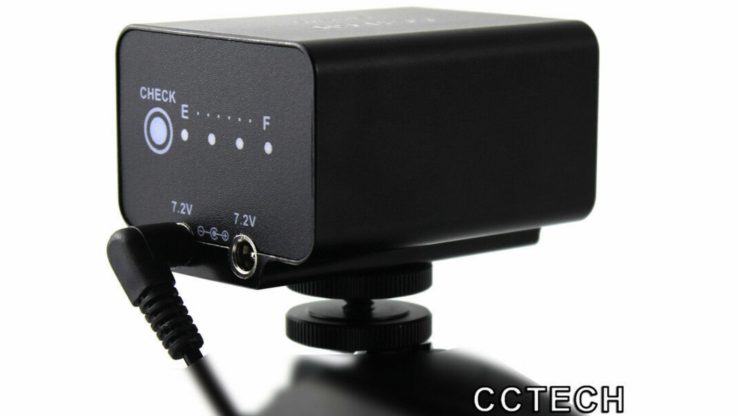 CCTECH has external battery solutions for a range of cameras, including the BMPCC 6K and 4K, Z Cam E2, Sony alpha series, and the Panasonic GH5 and GH5s.

A lot of mirrorless and small-sized digital cinema cameras use smaller sized batteries and home users like to use larger batteries to power the cameras for longer run times.

The CCTECH battery solutions are designed to be a lightweight, easy to mount power source that can extend the run times of your camera.

The batteries actually have four 7.2v outputs on them so you can use one battery to power a range of other accessories.

The battery is the equivalent of using 5.5 Canon LP-E6 batteries. The standard charger is 12.6/2A and the battery can be fully charged in about 3-4 hours. There is a battery indicator on the front of the power supply.

For mounting, there are three 1/4-20″ screw holes at the bottom, and the batteries some with a cold shoe adapter mount. You can also attach the battery to a single 15mm/19mm rod, there is also a 15mm/19mm double rod clamp. These are optional extras.