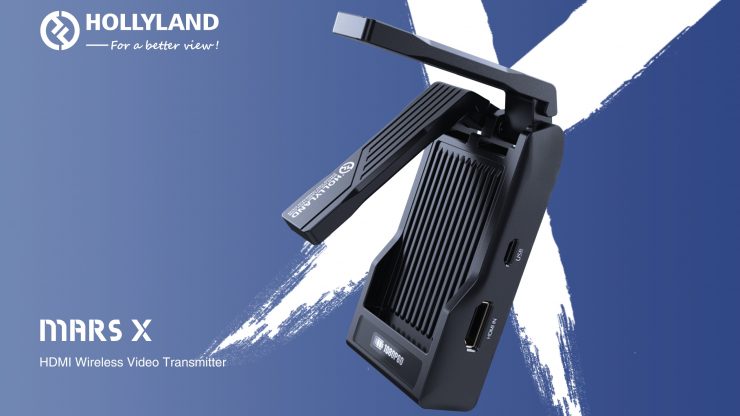 The Hollyland Mars X is a new addition to the companies Mars range of wireless video transmission systems.

Unlike the existing Mars range, the Mars X is just an HDMI video transmitter that is designed to be used with iOS and Android devices.

It allows you to use up to three iOS or Android devices simultaneously to monitor images coming from any camera that can output a signal over HDMI.

Being able to view an image on a tablet or smartphone is a great alternative to using a TX and RX unit and an additional monitor. It is a very quick, affordable, and easy way to give a client, a producer or director, gaffer, or even a hair and makeup person a way of viewing what the camera is capturing.

Whenever I do corporate shoots I tend to use the Teradek Serv Pro. That way multiple people can see what you are doing on their own devices. There is a certain level of comfort and familiarity that a client has with being able to view images on a tablet or phone.

All you need to do is to connect to the Mars X wi-fi on your tablet or phone and then enter a password. You then open up the HollyView App and that is where you can monitor the images coming from your camera.

There is a range of monitoring tools in the app. These include:

It is unclear as to whether you can load up your own 3D Luts.

Hollyland claims that the Mars X has an effective operating range of 300ft (91.4m), but that is only if you have a clean line of sight. The more realistic operating range is just 150ft (45.7 m).

There are eight frequency channel options that can be switched to so you can avoid interference and ensure stable wireless transmission. There is also a channel scan feature that is in the HollyView App. It helps users to find out which channels are clean and which ones are with interference in sophisticated WiFi surroundings.

The image latency is claimed to be <0.07s. The trouble is the latency over HDMI varies dramatically depending on what camera you are using. While the latency from the Mars X may well be <0.07s, you need to factor in how much latency the HDMI signal coming out of your camera has.

The Mars X weighs just 112g (3.95 oz) and it has been designed to take up a little real estate as possible on your camera.

The build quality looks to be decent and Hollyland has designed the Mars x with what they are calling rounded crashproof aluminum corners.

The Mars X also features fold-down antennas which is a nice addition.

It can be powered through its built-in 1300ma Lithium battery, but this only has a battery life of just 1 hour. I’m not sure why you would put an in-built battery into a device that can only operate it for 1 hour. This makes no sense to me.

The battery takes 2.5 hours to charge.

You charge it via the USB type-C (5V-12V) input. We believe you can also power the Mars X through this port. Realistically this is your only option if you want to run it for more than an hour.

The Mars X comes with a cold shoe to 1/4 20″ adapter that you can use to mount it directly on top of a small mirrorless camera.

There is 1/4- 20″ mounting holes on the bottom and the back of the transmitter.

Haven’t we seen this type of device before?

Yes, we have. Wireless video transmitters that transmit signals to iOS or Android devices are nothing new and there have been options on the market for many years.

Other similar devices include:

There are also a few devices on the market that also have RX and TX units and also have the ability to stream to iOS or Android devices. These include:

I just don’t see a lot of innovation with the Mars X. It doesn’t t do anything that other devices haven’t already been doing for years.

The Mars X will retail for $179 USD and it should be available to purchase very soon.

At $179 USD it is a very similar price to both the Accsoon and PFY EagleEye options.