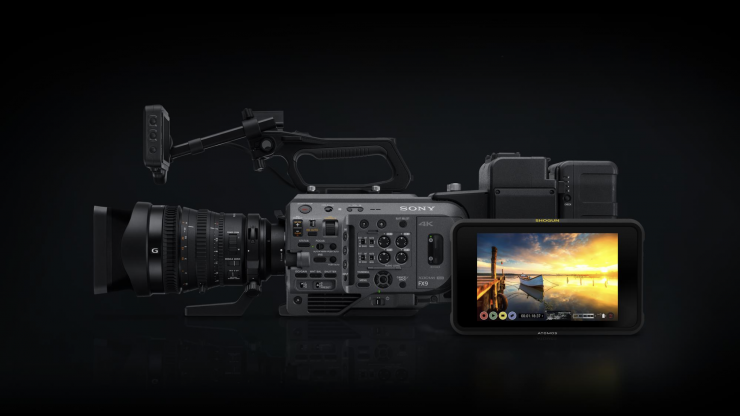 Sony has finally announced details of how you will be able to record the RAW signal from the Sony FX9.

Outputting 16-bit RAW is one thing, recording it is another thing altogether. At the time of the announcement, there was no recorder on the market that was capable of recording this 16-bit signal from the FX9. Even Sony’s $6,980 USD AXS-R7 External 4K RAW Recorder won’t work with the required XDCA-FX9 Extension Unit.

How do you record RAW from the FX9?

Well, you will need both the XDCA-FX9 Extension Unit and the Atomos Shogun 7. As I mentioned earlier, even though the FX9 can output 16-bit linear RAW, you can’t actually record 16-bit linear RAW.

The Atomos Shogun 7 will take the 16-bit linear RAW signal coming from the FX9 and then convert it into a 12-bit RAW so it can be recorded as ProRes RAW. Just how this conversion process is being done isn’t clear.

So what can you actually record from the FX9?

Initially, the Atomos Shogun 7 will record Apple ProRes RAW images at up to DCI 4Kp60, or in 2K up to DCI 2Kp180 from the FX9 and XDCA-FX9 Extension Unit.

Recording over SDI from the FX9 with the Shogun 7 extends the performance of the FX9 by taking RAW data from its sensor and recording it in the ProRes RAW format.

“I’m thrilled to be working with the team at Sony to bring this to life. It’s great to add the Sony FX9 to the large and expanding ProRes RAW ecosystem. The flexibility and convenience of ProRes RAW make the FX9 and Shogun 7 an awesome combination for any filmmaker seeking perfect colors and amazing latitude in post. Initially, we will have 4Kp60 and 2Kp180 ProRes RAW recording options and we’re constantly developing more capability in our product to support our partners like Sony.”

Below are the resolutions and frame rates you can output from the FX9:

As you can see, the table is a little confusing, So I’ll break it down for you:

Calling any type of crop FF Crop is a little bit cheeky in my opinion.

How do these RAW recording capabilities compare to the C300 Mark III?

The FX9’s main competitor based on price is the C300 Mark III. Both can record RAW, but the Canon C300 mark III can do it internally. On the canon C300 Mark III, you can do it for free. Even though the firmware is free on the FX9 you still need to add the Sony XDCA-FX9 Extension Unit and the Atomos recorder to be able to do it.

So, let’s compare what type of RAW recording you can do on both cameras:

This all comes at a cost

With all of the added expense, and having to attach the XDCA-FX9 and an additional monitor/recorder, it will be interesting to see how many FX9 users go down this path.

Besides the obvious expense that is involved and having to add additional components and weight, ProRes RAW recording could also arguably be considered a caveat in some ways. ProRes RAW has gained some traction, but its implementation into a lot of software has been slow. It still isn’t supported in Resolve and Adobe Premiere Pro.

Some clients or productions may not want to deal with ProRes RAW material. At least with Canon’s Cinema RAW Lite you can edit and grade the footage in just about any NLE or grading software.

Being able to record RAW certainly increases the FX9’s flexibility but external RAW recording almost seems antiquated in 2020. Canon, RED, ARRI, Blackmagic, and Knefinity (once the MAVO Edge becomes available), all have cameras that can record RAW internally. Sony and Panasonic are the only two main players who are still doing RAW externally. I am sure they have their reasons, and while they may well be very valid reasons, a lot of shooters are now expecting internal RAW recording solutions.