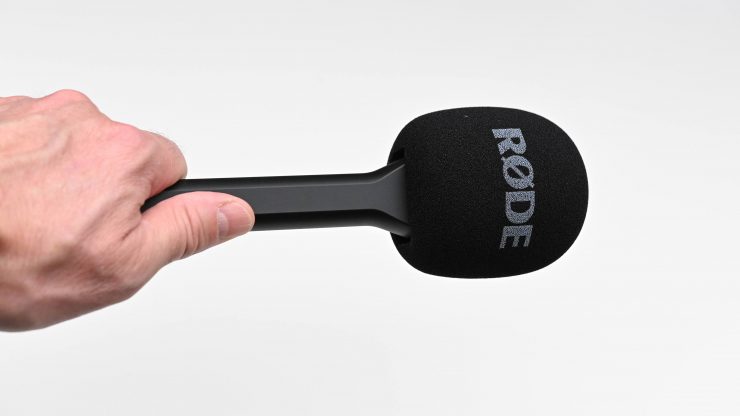 A few weeks ago RØDE, along with announcing a white version of the Wireless Go, announced the Interview GO Handheld Mic Adapter.

The Interview GO Handheld Mic Adapter for the Wireless GO is an interesting concept, and as its name suggests, it turns your Wireless Go into a handheld microphone.

The Interview GO comprises an adapter and a windshield, that’s it.

The Interview Go is plug and play. All you need to do is place the Wireless GO transmitter into the adapter, and fit the windshield over the transmitter.

On the Interview go, there is a groove where you slide the clip of the Wireless GO into. This creates a very secure connection and the Wireless GO doesn’t move around or wobble in any way. This is important because the microphone on the wireless GO would pick up any sound if there was any movement.

This is a hard one to judge without using the product extensively out in the field.

At first glance, it does look like it might be cheaply made, however, if you look at it more closely the build quality is actually not too bad.

There really isn’t too much to the Interview GO, it’s essentially just a holder for the Wireless GO. There aren’t ant electronics or batteries or anything else. It is best to think of it as a selfie stick for a wireless microphone.

Who would actually use this?

In my opinion, this is a fairly niche product. RØDE’s official line is that you could ‘Use this adapter in any situation where your Wireless GO would benefit from the look and easy functionality of a handheld microphone, such as on-camera interviews, walking a convention floor, and other ENG scenarios.’

It is not something that is likely to be used by Vloggers or even ENG crews. A good proportion of ENG crews use dedicated hand mics with in-built transmitters or handmics with a Plug-In Transmitter. In saying that, it would be a simple back up that you could keep in your kit if your main solution fails.

Video journalists doing their own interviews could use it in situations where a lapel microphone won’t work.

The only other place I can really see it being used is for video journalists when are people doing interviews on show floors at conventions.

The biggest downside of the Interview GO is the windsock. It isn’t that there is anything wrong with how it works, it is the giant RØDE logo that is on both sides of it. I know RØDE loves to put its logo on every product, but they should have provided a windsock that didn’t have a giant logo on it. There is a large proportion of users who don’t want a logo on their microphone’s windsock, especially when it will be in shot.

The Interview GO isn’t going to magically transform your Wireless GO into a microphone that sounds like a dedicated hand mic. The audio quality you get is going to be exactly the same as that of the Wireless GO’s built-in microphone.

As long as you get the microphone fairly close to your subject the audio quality is going to be ok. The built-in omnidirectional condenser microphone is actually better than you may think. The pick-up pattern is very similar to the omnidirectional polar pattern of the companies Reporter microphone.

For the test above I had the Wireless GO with the Interview Go and the Reporter Mic at the exact same distance and was recording both signals directly into a camera.

The Wireless GO does a reasonable job, but it doesn’t sound as good as the Reporter microphone. This came as little surprise, but none the less, I was still reasonably impressed with how well the Wireless GO worked as a budget alternative.

The included windshield works ok, but if it is windy outdoors it will still pick up noise.

The RØDE Interview GO Handheld Mic Adapter for the Wireless GO retails for $29 USD. Is this too much for a simple adapter? Possibly, but it isn’t ridiculously priced.

It is hard to criticize a product that only costs $29 USD and expands the versatility of an existing product. The RØDE Interview GO Handheld Mic Adapter for the Wireless GO works as advertised and it can actually produce pretty good results.

It isn’t going to sound like a dedicated hand mic, but it will still do a reasonable job. The biggest caveat with the product is a cosmetic one. Why RØDE insisted on leaving their logo on the windshield is a mystery to me.

Despite my complaints about the windshield, I found the Interview GO to be a nice accessory for the Wireless GO. It is a niche product and it won’t appeal to everyone, but if you are on a budget and you can’t afford a dedicated hand mic then it is worth looking at.