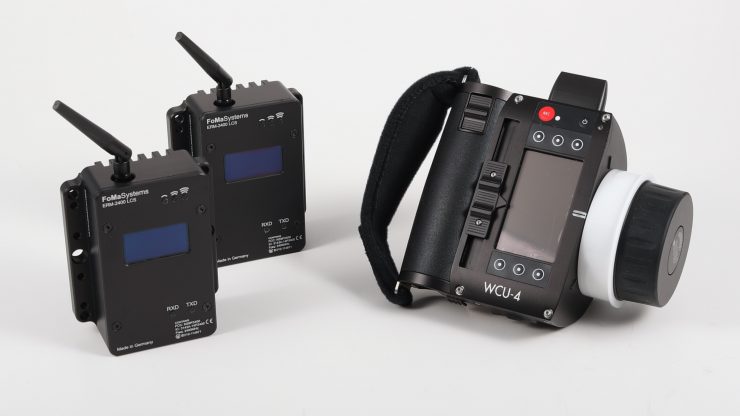 ARRI has announced the ERM-2400 LCS, a set of radio modules from FoMa Systems, that significantly increase the range of wireless camera and lens control.

What does it do? An ERM-2400 LCS set of radio modules basically extends an LCS, LBUS, EXT (CAN bus)cable connection over air. As such, it can connect ARRI and cmotion hand units to cameras and motor controllers and they behave as if they were hard-wired, but with an exceptionally great wireless range.

Controlling lenses and camera functionality over large distances without any communication issues becomes extremely important on large productions. The ERM-2400 LCS radio modules will be extremely useful to filmmakers for situations where a stable radio connection is required over a long distance, such as action shots involving vehicles. Previously these kinds of scenarios could sometimes prove challenging for wireless hand units on their own, but with a set of ERM-2400 LCS radios this becomes a lot easier.

ERM-2400 LCS radio modules are sold by ARRI as a set of two and various adapter cables are available. The set can be used to connect ARRI and cmotion hand units to cameras and motor controllers with an exceptionally good wireless range of around 1,000 m/3,280 feet. .

Above you can see the various inputs, outputs, and mounting points.

The ERM-2400 LCS is compatible with equipment providing LCS, LBUS, and EXT interfaces. A pair of ERM-2400 LCS modules can connect such two devices, for example:

ARRI supplies the ERM-2400 LCS as an already paired set of two radio modules. Once plugged into a handset and camera device, they will automatically power up and wirelessly connect. The modules can be used as either transmitters or receivers. Pre-configured pairs can be identified by a matching number code on the back of each device.

It is important to note that the OCU-1 / Master Grips override function is not supported with ERM-2400LCS, because override is not possible in hardwired mode neither.

I am still attempting to find out this information. I will update the post once I get it.