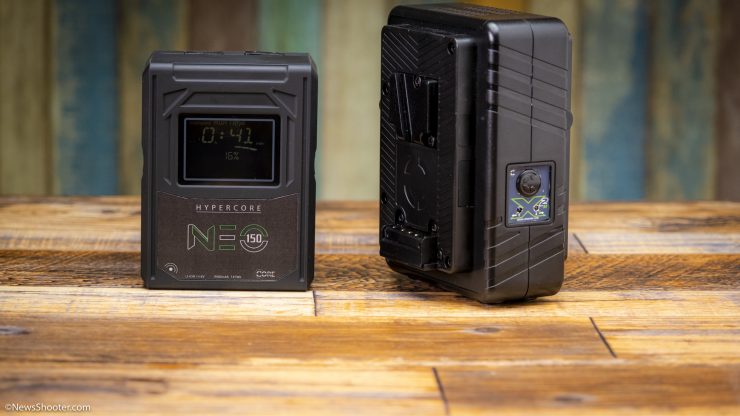 Not Just For Cameras

Batteries in the 150wh range are so useful beyond just powering cameras. I use them for lights and to power and recharge USB devices. For example, The Ledgo LED LG-E268C requires 26.8W of power. I attached a mini v-lock clamp to the light stand and ran power with a D-Tap to DC plug cable. The NEO 150 has a D-Tap and USB on top.

This pic was snapped just before the NEO 150 died. While it shows 45-minutes left the 17% figure is more important as batteries tend to be fully depleted at 20%. While power draw will make a difference a best practice is to swap out the battery before it goes lower than 20%.

For my remote anchoring setup, I used the USB out to keep my iPhone charged via the USB output. I could leave the iPhone on for hours using this setup.

The Mini X2 charger lives up to its “Mini” name as it’s only 5.5″ tall and 4.25″ wide. The AC cable is lightweight as well as no brick power supply is used keeping the whole unit compact. The power cable plugs directly into the charger.

The Mini X2 chargers two batteries simultaneously, and without a noisy fan kicking up. I’ve reviewed some portable chargers that do make more fan noise than I would want around a set. In single charge mode, it charges at 3 amps and can charge one 98wh pack in 2.5 hours.

Core SWX wanted to make the Mini X2 as portable as possible. To do so they stripped it down to be mean and lean by not including a stand or 4-pin XLR output.

Due to not having a stand, it does make the charger balance awkwardly if two batteries are not used on the unit. If only one is being charged it will lean over. While this is visibly not pleasing it doesn’t affect the performance and again it keeps the size and weight of the Mini X2 down.

The Mini X2 is a good choice shooters who want to pack as light as possible and get full-size charger performance.

The new X2 Mini shares the same charging features as the bigger X2S. The big difference is the X2 Mini doesn’t include a 4-pin XLR output with a 90W power supply for cameras, lights, or other equipment that can draw from a 4-pin XLR.

The slim charger can charge a single battery at a 3-amp rate or batteries in both bays simultaneously at 2 amps. Since it sits vertically with two batteries mounted, the X2S takes up less space than traditional chargers.