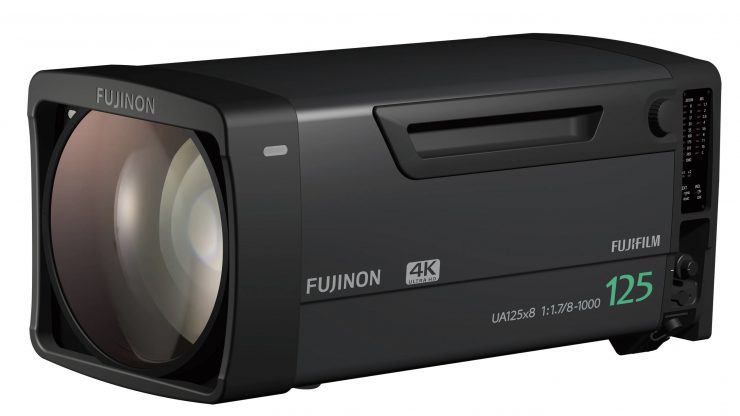 Fujinon has announced the UA125X8 a 4K-compatible broadcast lens with the world’s highest zoom ratio of 125X.

The UA125X8 box lens covers a focal range of 8mm~1000mm, all at a constant F1.7 aperture. It is now the longest and widest 4K field lens for Ultra HD applications in the Fujinon UA series.

It is quite an engineering feat that Fujinon has been able to make this news lens have both a wider and longer focal reach than the UA107X84 while only increasing the weight by less than 6 lb and the length by 1″.

Being able to go that little bit wider and longer makes a big difference when you are covering sporting events.

The new lens uses the company’s proprietary optical technologies and is primarily going to used for coverage of sporting and music events.

The UA125X8 is equipped with 16-bit encoders and employs the latest High Transmittance Electron Beam Coating (HT-EBC). This is claimed to result in richer colors and greatly improved blue response and transmittance.

The lens is also coupled with Fujifilm’s exclusive Aspheric Technology, which is said to reduce ghost and flare, and increases light transmission. A
proprietary anti-fogging design minimizes lens fogging and reduces downtime due to moisture.