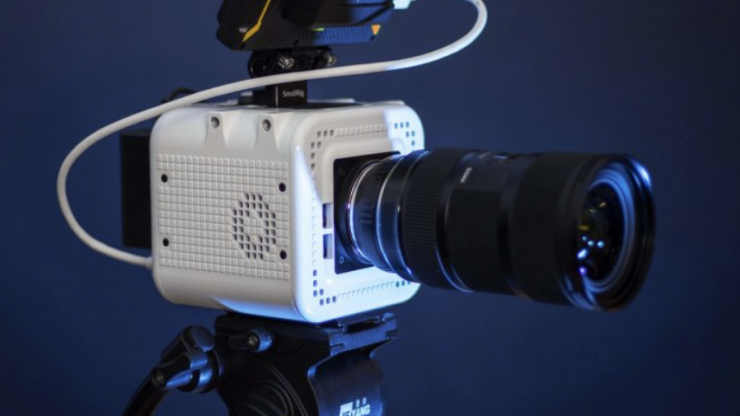 Last year you may recall that we brought you a post about the Octopus Camera from Octopus cinema. The Octopus Camera uses non-proprietary hardware and software and has been built from the ground up to be an open platform with removable and upgradable parts.

The project is still going and Octopus cinema has now released graded material from the prototype color sensor version of the camera. The material above is from This is from the Micro Four Thirds prototype model in 4K lossless 12-bit CinemaDNG. A Sigma 18-35 and a Canon EF to Micro Four Thirds focal reducer was used. The ISO was 800.

Above you can see another new video that gives you an indication of how the color science looks.

The camera is capable of capturing digital audio from any standard USB audio device at sample rates up to 192kHz/32-bit. Above you can see a new video showing it working.

Multiple tracks from multiple audio sources can be simultaneously mixed into RAW or compressed video recordings.

As well as USB microphones such as the RODE VideoMic NTG, this also allows for dedicated field recorders with USB to be used as digital input sources.

The camera uses non-proprietary hardware and software. An optimized Linux version runs on an 8-core i7 Intel CPU. The SDK allows for full utilization of this CPU. For example, a Unity3D AR project containing CG assets can be deployed to the camera allowing for real-time camera-tracked visualization of VFX without any additional hardware.

Octopus Cinema is currently working on two different versions of the OCTOPUS CAMERA. One will utilize a 5K full frame sensor, and the other a 4/3″ 4K sensor.

Unlike a lot of digital cinema cameras, the OCTOPUS CAMERA is not tied to a single image sensor. Instead, the camera supports a range of image sensor modules from third-party sensor module manufacturers. At the moment the key sensor module developer is a company called XIMEA who specializes in imaging modules.

Not being tied to a particular sensor is a very interesting concept, and while most camera manufacturers are very reluctant to disclose where their sensors come from, Octopus Cinema looks to be very upfront with what sensors their cameras will use.

The current prototype cameras will use XIMEA’s 1.1-inch and Full Frame image sensor modules. XIMEA provides a range of high-performance imaging modules that can be interchanged allowing the Octopus Camera to have a fully upgradable image sensor.

All sensors are capable of full losslessly-compressed 12-bit RAW at 4K 30fps. 10-bit HEVC and lossy RAW allow for higher frame rates depending on the sensor. Additional recording formats can be added trivially with the SDK through Libavcodec or 3rd party libraries.

As far as recording media goes, the camera has SSD and CFast 2.0 options using the SATA III and USB3 ports connected to the main board.

The camera measures just 110 x 110 x 110mm, and it weighs in at 900g. It is made out of CNC Milled Aluminium in a gloss white finish. It is designed and assembled in London, UK.

Interview with the developer

I reached out to Russell Newman, the Lead Engineer/Founder of Octopus Cinema to ask him some questions about the cameras.

Q. How long have you been working on the camera?
The camera has been in development in some form since the beginning of 2018.

Q. What was the inspiration behind building Octopus?
My background is in 3D graphics and software engineering, and I had always a strong interest in cinema technology – I had until recently owned almost every camera Blackmagic Design released. Blackmagic’s success and projects such as the Digital Bolex made me realize that the days of pro-quality footage being reserved for the likes of a £10k+ Sony camera would be soon gone.

Q. With so many digital cinema cameras already on the market, what makes Octopus different?
The open nature of the product I believe sets it apart from others – all the components are documented and available to upgrade or replace. Additionally, some of the image sensor characteristics/options are also hard to find from other products – namely native monochrome/IR capabilities and global shutter.

Q. What features and specifications does Octopus offer?
Recording wise, the camera records lossless 12-bit RAW 4K up to 30fps and up to 60fps with 10-bit HEVC. This is, however, a base starting point. We would like to build a community for developing additional features available in an open source environment.

For example, the HEVC encoding uses the libavcodec library which is part of the ffmpeg library. We could then add support for encoding any codecs which ffmpeg supports – providing they’re efficient and stable enough.

The sensors we’re aiming to support at the moment are 1.1-inch (4K) and Full frame (5K). Both of these are global shutter with color and monochrome variants. The dynamic range falls between 12 and 13 stops.

Will the camera have any audio capabilities and any plans for any type of modules to support SDI/Timecode etc.?
The camera body has 4 USB3 ports which we intend to use for digital audio recording and supporting new add-on modules – either third-party or developed ourselves.

We could add SDI output through a separate module connected via USB3, but for the time being the device only supports natively two HDMI2.0 outputs.

Timecode can be added through third-party products which can receive/send timecode information via USB: http://www.ese-web.com/es71.htm

It would be our aim to support these products should it be on many people’s wish lists.

We believe USB audio recording to be a good solution as it defers the A/D conversion to dedicated and isolated audio hardware.

Q. When do you hope to have Octopus available to purchase?
We are looking to have the 1.1-inch model available by Q3 2020.

Below are the specifications that we have so far:

The camera is not being targeted as a competitor against most other digital cinema cameras that are already on the market.

Like any camera under early development, there are never any guarantees that it will ever get to market, but the fact that the project is still alive and well 9 months later is a good sign. Making a camera is not an easy task and we have seen many companies try and fail in the past. It will be interesting to see how the Octopus Cinema Camera develops moving forward, especially given the Coronavirus outbreak.