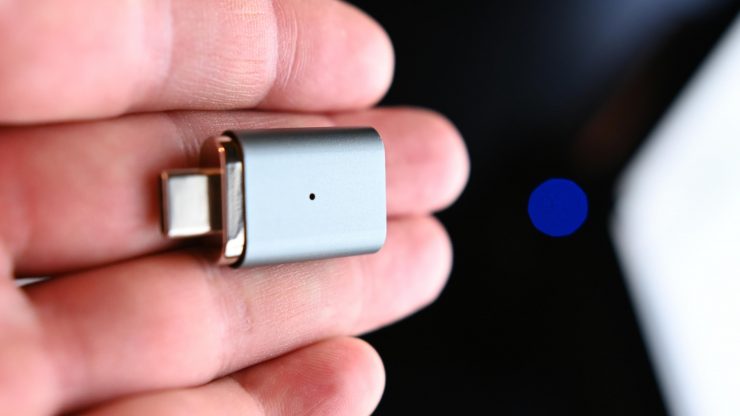 MagRig, a Hong Kong startup, has developed a new Magnetic USB-C Adapter. Some users were disappointed when Apple discontinued the MagSafe feature on its computers. MagRig has taken that original concept and added Thunderbolt 3 to the adapter to put a new spin on an old idea.

If you are working out in the field with a computer the last thing you want to happen is for the cable you are using to break or get damaged. The beauty of a magnetic connector is that they are very hard to damage

With USB-C and Thunderbolt 3 being widely adopted for power delivery and data transfer, there is certainly a need for smarter cable design.

What is it and what does it do?

The MagRig Magnetic USB-C Adapter, as its name suggests, connects magnetically to any Thunderbolt 3-enabled device to allow you to transfer data at speeds up to 40 Gb/s. It also transfers up to 100 watts of power and supports 6K displays.

It can fit into any USB-C device because the adapter features a detachable magnetic tip. Just like how the original Apple MagSafe worked, you just bring the magnetic adapter close enough to the magnetic receiver tip and it connects and secures. It disconnects just as easily when the cable is pulled away from the adapter.

According to MagRig, the adapter has a very strong magnetic force as it uses Neodymium magnets N52.

You can also use two Magrig adapters with one single cable to connect to a dock or display and charge your MacBook Pro or MacBook Air simultaneously.

To get the Magnetic tip out of a device you need to use this little plastic wrench tool that is supplied. While this is relatively easy to do, I don’t think you would want to lose it. My advice would be to affix it to whatever cable you are using. It has a little hole on one end so you could use a little bit of string or even put it on a keyring if need be.

You just need to be careful if you use the MagRig on a desktop such an iMac. Because the Thunderbolt ports are set vertically and not horizontally, the magnetic tip can be very hard to get out.

Nobody likes adapters, but MagRig has done a pretty good job of keeping its adapter relatively small and compact, which allows you to still have it attached even when you put your laptop into a protective case.

MagRig designed two types of pogo pins for the connector. The design allows for ±9 degrees of angle for the female adapter so there is some leeway when attaching it.

4 ribs and 4 grooves are designed relatively on the mounts to physically isolate two rows of contact pins, which helps to eliminate the possibility of short-circuiting and to enable auto-alignment between the male tip and female adapter.

The MagRig is just an adapter, but it looks to be well made The magnetic force is certainly strong and the adapter is not going to disconnect easily.

There was nothing about the build quality that concerned me.

So far, MagRig has tested the following devices with the adapter:

The MagRig certainly works as advertised and I found it great to use out in the field with a laptop.

I would personally be reluctant to use a magnetic connector for a hard drive connection, especially in the field. I don’t want a hard drive or card reader getting disconnected during a transfer.

Above you can see a short test I did to see how easily the MagRig disconnects when knocked or moved. What was interesting to see is that sometimes the actual USB-C cable comes out of the adapter before the magnetic attraction breaks.

It is relatively easy to lose the connection if you start shaking the cable or hard drive. It is perfectly fine for hard drives sitting on your desk, but I wouldn’t use it out the field in a moving vehicle, etc.

For attaching to a battery via USB-C to power your laptop in the field is works well, but if the cable moves around too much or gets knocked at a certain angle it will come loose.

I also wanted to do a speed test to make sure it worked with Thunderbolt 3 and there wasn’t any performance penalty when using the adapter.

Above you can a Quick Bench test I did with an OWC ENVOY EX with the MagRig adapter connected to a computer. From my testing, there was no performance hit from using the device.

From June 2020, MagRig is expected to start shipping out its adapters. Interestingly enough, MagRig is promising that it will either deliver the product on time or refund your money in case of delays. I’m not 100% sure how you can make a promise like this on Kickstarter, but I think MagRig understands that never-ending delays are painful for backers and reflect poorly upon the company itself.

Magrig’s goal is to raise $10,260 USD, which is a pretty small amount. The adapter will be funded only if the company manages to reach its goal by March 30, 2020.

What does it cost?

On Kickstarter you can back it for the following prices:

At $49 USD it isn’t exactly cheap, but considering a standard Thunderbolt 3 (USB‑C) Cable (0.8 m) from Apple costs $39 USD, you could argue it is reasonably priced. I’ll leave that for you to decide.

Wait, haven’t we seen this before?

MagRig is certainly not the first Magnetic USB-C Adapter to be announced. A company called ThunderMag also has a similar product and they are also running a Kickstarter campaign.

So what are the differences between the MagRig and the ThunderMag adapters?

The MagRig certainly works as advertised and if you miss the old MagSafe adapters then you will like this adapter.

I could never understand why Apple did away with the Magsafe feature. Sure they had to move to USB-C, but there is no reason they couldn’t have made a device exactly like this.

While I personally wouldn’t use it to connect a drive or card reader out in the field, I do like it as a power delivery solution. I often like to power my laptop out in the field from camera batteries that are equipped with a USB-C output. Having a magnetic power adapter in these scenarios is very handy. If you are editing in a moving vehicle you don’t want the battery falling off a seat and then putting all of the strain on your connector and cable. With a magnetic connection, this doesn’t become a problem.

At $49 USD it is a little on the pricy side for a couple of adapters, but it is more fully-featured and cheaper than the competing ThunderMag.