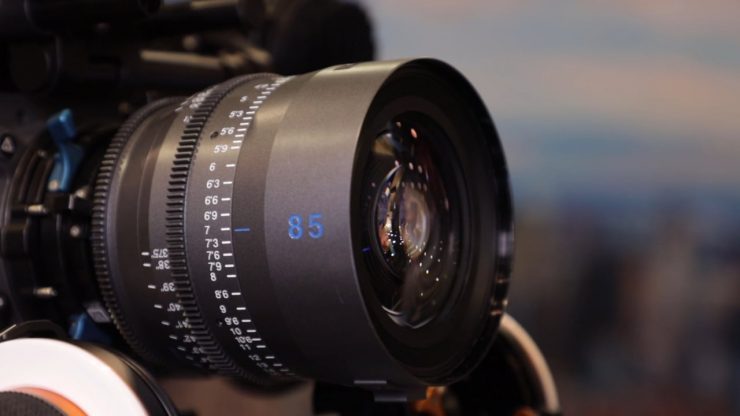 The Vista ONE is very much aimed as rental lenses and rental houses snapped up most of the available sets that first went on sale. If you want to buy a set you still can, as Tokina did another run of the lenses.

Above you can see our first look at the lenses.

Why just a single coating?

There has been a big push recently by lens manufacturers to introduce uncoated lenses. The trouble with uncoated lenses is that they maintain very little contrast and the flares can be over the top. This may be great for certain shoots, but it does give them limited versatility to be used as a day to day lens.

On the Vista ONE, the single coating allows for a reduction in contrast and increase in lens flare when off-axis lighting is used. When the lens is on-axis to the light source, the lens retains contrast and normal lens flare properties.

The single coating technology used on the Vista ONE lenses provides a good compromise between creating a unique look, and still maintaining contrast. This offers advantages over uncoated lenses that may provide too much reduction in contrast and less image control.

By having a single coating and not multi-coatings like their Vista cousins, you will get flares that lean more towards the blue/purple end of the spectrum.

What I like about the Vista ONE is that they match the original Vista and you can mix and match lenses from both series. The Vista ONE looks identical in most respects to the standard Vista when you aren’t pointing the lens towards a light source.

The difference between a standard Vista and the Vista ONE becomes more evident when you point the lend towards a light source. The nice aspect about the flare that gets produced by the Vista ONE is that it isn’t over the top like an uncoated lens.

For me, you can get the best of both worlds. You can have a lens that maintains contrast and then when you want a bit more character you can simply play with light to create flares or more character.

A single coated lens is arguably the sweet spot if you are looking for a good compromise between multi-coated and uncoated lenses.

Just like the standard Vista’s, the Vista ONE is a series of very fast (T1.5) primes that cover a 46.7mm image circle that allows them to be used on full frame sensors, and even on the slightly wider-than-full frame RED WEAPON 8K’s 40.96 x 21.60mm sensor.

The 18mm T1.5’s image circle of light is almost 59mm in diameter and it will cover the ARRI Alexa65 in 5K mode.

The 18mm T1.5 is the fastest 18mm wide angle lens on the market that covers VistaVision sensors.

The recently announced 135mm T1.5 is also only matched by the ZEISS Supreme Prime as far as being the fastest 135mm lens on the planet that covers VistaVision sensors. This lens will be available to purchase for those who have previously bought Vista One sets.

While some of the newer cinema primes from companies are rehoused from stills glass, Tokina has purpose-built these just for cinema, with all new elements inside. They are also color-matched for consistency across the range.

The one thing that bugs me about some companies’ range of prime lenses is that they don’t have a consistent aperture across all lenses. The nice thing with the Tokina Vista and Vista One is that the aperture is T1.5 from 18mm up to 135mm.

The lens features three aspherical elements and it has 9 aperture blades. The optical design also uses 17 Elements in 14 Groups. Making a lens that is this wide and this fast, with minimal focus breathing, that covers an image circle of φ46.7mm was a huge challenge. So what makes the 18mm T1.5 so special?

The larger the aperture on wide angle lenses, the more difficult it is to control the aberrations, due to the severe “ray bending”. To overcome these hurdles manufacturers require more sophisticated designs, exotic materials, and more expensive engineering. The general design idea is to capture a wide FOV, and slowly bend the rays towards the image plane, minimizing steep refraction angles at the optical surfaces.

The wider the initial aperture, the more apparent optical flaws will become, which means that the lens design has to be close to perfect. But the more perfect you try to make a lens, the more lens elements you need to use in the optical formula.

In addition to this, the larger the aperture or T-stop, the wider the front glass element needs to be. If it’s wider, it’s also thicker in proportion, and all the glass elements behind that front element must be proportionally larger. When this is the case, there is a huge increase in size, cost, and weight.

Making an 18mm full frame T2.8 lens is far easier and cheaper than making a T1.5 one. Every stop you go down equates to an increase in price, weight, size, and complexity.

I personally like the look of the lenses, but at the end of the day, it doesn’t really matter what they look like on the outside.

The Vista ONEs feature the exact same optical performance as the standard Vista primes.

Above you can various tests I did with the standard Vista primes.

Tokina claims that the Vista and Vista ONE series have almost no breathing, and from testing the lenses I found that to be true. If there is any breathing it isn’t noticeable enough to be distracting.

I really hate seeing bad image shift when pulling focus. It is distracting to the viewer and can ruin shots. The Vista and Vista ONE series is as good as any other prime cinema lens I have ever used when it comes to the lack of focus breathing.

The Vista ONE series housings are constructed entirely out of metal and they certainly feel very robust. The focus and iris barrels are beautifully weighted and are nice to operate. The focus and iris markings are clearly labeled on both sides of the lens and are easy to read.

The lenses have a 114mm front diameter, a 112mm filter thread.

Here is what the individual lenses weigh:

There is no way of sugar-coating it, these are heavy lenses. As a comparison, below are what the Canon Sumire and Rokinon XEEN CF primes that are T1.5 or faster weigh.

Just like the standard Vista primes, the Vista ONE certainly lean more towards warm tones than say lenses from Zeiss. They have a nice amount of character and don’t appear too clinical and uninspiring. What look you actually prefer from a lens is entirely going to come down to personal choice. I really liked the warmer tones of the Tokinas as I found the color reproduction matched very well with my Angenieux Optimo Style zooms. This allowed me to use a combination of zooms and primes while still maintaining a fairly consistent look.

The color tone of a lens is really something you should look at closely if you are going to be using both prime and zoom lenses from different manufacturers. Certain prime and zoom lenses work better together than others. What will work for you will also depend on what camera you are using.

Sharp as a tack

Having a fast T1.5 aperture is great, but are the lens useable wide open? In a nutshell, yes. The lenses are very sharp when used wide open at T1.5.

The Tokina Cinema Vista ONE lenses have almost zero chromatic aberration even wide open at T1.5.

The problem I personally have with uncoated lenses is that their flare and image characteristics are generally so extreme that their uses are limited. Uncoated lenses are specialty items and they can’t be used on every project.

To me, the beauty of the single coated Vista ONEs is that they don’t produce crazy amounts of flare and they still maintain good contrast. In a lot of ways they of a good balance between a modern and older lens.

I used the Vista ONE primes to shoot a short piece on a DJ here in Tokyo. I thought this would be a good test for the lenses as it was going to be dark and there were going to be a lot of moving light sources. The above images were shot mostly wide open because of how dark it was.

A club environment would be very difficult to shoot in with uncoated lenses as the light sources would create so much flare that it would overwhelm the majority of images you were capturing. The above images were all taken using a flash.

The conditions I was shooting in were very dark and I was wide open at T1.5 at 3200 ISO. You will see some flash banding from some of the lights. It was impossible to get rid of it. No lights were used and all the footage you are seeing is captured in completely uncontrolled conditions.

The Vista ONE lenses performed really well in this type of environment. As there was a lot of very strong light I decided to also use a Tiffen Glimmer Glass filter to help diffuse and soften the light even more.

The images have been graded in a very stylized way.

Only a limited number of sets were initially produced they sold out very quickly. A 2nd run was released due to popularity. The full set which consisted of 6 lenses sells for $55,000 USD.

Any Tokina Cinema reseller worldwide can get them. You just need to ask your local reseller.

If you want to use the lenses you can find them from select rental houses.

I really enjoyed my time with the Vista ONE lenses. I especially liked that I could mix and match them with my regular Vista primes.

They are nice and sharp and they strike a nice balance between a multi-coated lens and a lens with no coatings.

You could certainly make an argument that it is better to buy multi-coated lenses and then use diffusion filters or lighting to help create certain looks.

Lenses such as these aren’t going to be to everyone’s taste, but there is nothing wrong with that. Lens choice is very much a personal decision and it can be very project-specific.

I still personally think that Tokina’s Cinema lenses are extremely underrated. I think a lot of people simply don’t look at them because they don’t have Zeiss or Cooke or ARRI written on the side of them.