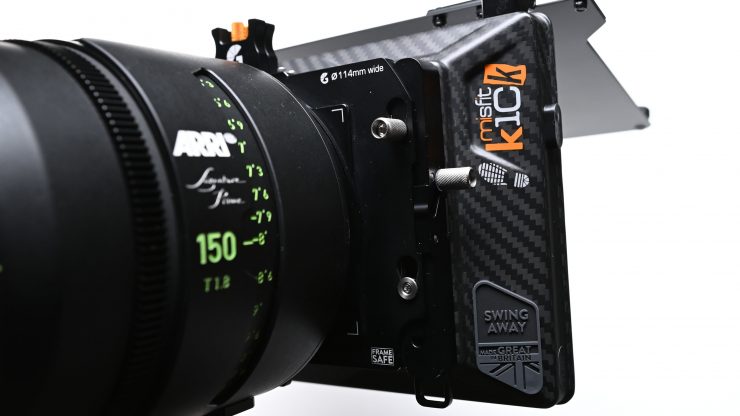 The Bright Tangerine Misfit Kick is a follow up to the company’s very popular Misfit matte box.

The Misfit Kick builds on the original Misfit, and at first glance, they appear to look very similar. However, Bright Tangerine has made several key improvements which I will talk about further down in the review.

The main component of the Misfit Kick matte box is the Core, which features Bright Tangerine’s patented Reveal Stage, which allows for tool-free conversion between a 2-stage and 3-stage. All you need is a third filter tray.

A 2-stage matte box will always have a wider field of view compared to a 3-stage, as a third stage will push the shade further out from the lens. So when you don’t need to use three filters, you gain the extra coverage without having to spend time removing the third stage, it simply collapses into the core.

Another reason why you may want to have 3-stages is to use a diopter or Rota Pola. These filters may not be needed all the time compared to an ND and diffusion/FX filter that may stay loaded for a whole shoot, so having the ability to drop in a third filter when needed is always handy.

The 4 x 5.65″ filter trays are made of aluminium and have a spring-loaded locking clasp.

The top flag is made of true carbon fiber and has variable side wings. It attaches to the Misfit Kick via a quick-release mechanism and can also be secured as a bottom flag.

Bright Tangerine certainly has a strong appreciation of the British Punk group The Clash. The Misfit Kick is not the first Bright Tangerine matte box to have name ties to the group. The Strummer DNA matte box is named after The Clash’s lead singer Joe Strummer. The original Misfit after The Misfits, the VIV after Vivienne Westwood who many regards as the mother of punk and so on.

What is the difference between the Misfit Kick & the Misfit?

You may be wondering why Bright Tangerine would release a new version of an existing matte box? If it ain’t broke why fix it? While there is nothing wrong with the original Misfit, there are always ways where a company can improve an existing product.

The whole idea with the Misfit Kick was to build a matte box that took the best elements of the original Misfit and improved on them.

One main key difference between the Misfit and the Misfit Kick is the updated Reveal System that Bright Tangerine is using.

Bright Tangerine has redesigned the reveal stage mechanism so it is a lot more robust and easier to use. My biggest complaint with the original Misfit was that the reveal stage was a little fiddly to use, and it did have a habit of coming loose on occasion.

The new Reveal system uses what I would describe as a two-stage locking mechanism. It has primarily been designed to make sure that your filter stages and clamp adapter can’t move around or come loose.

The way that the filter trays load in has also been changed. Rather than use ball bearings like traditional matte boxes, the Misfit Kick uses a new leaf-spring system in combination with a protruding ridge to secure the filter trays, creating a positive locking position.

For even more security, a filter guard can be mounted onto the bottom of the sunshade. This will be available soon.

Just like the original Misfit, the new ‘Kick does not have rotating stages so if you want to use a circular pola, you will need to use a Rota Pola or mount a 138mm round filter into a compatible donut. Not having rotating stages keeps the Misfit Kick simple and compact.

Another big change with the Misfit Kick is that it is now compatible with ARRI LMB accessories, including the ARRI backs, filter trays, rod consoles & hard mattes, which greatly increase its versatility.

Pretty much every rental house across the globe will have ARRI backs and accessories, so if you needed to rent a lens you would be able to get a back to use with the Misfit Kick.

You can view the full list of compatible ARRI accessories on Bright Tangerine’s site.

Bright Tangerine has also added what they call a ‘Frame Safe’ design that offers an ‘Extreme Wide Field of View’. This is seen in the corners of the openings of the clamp adapters to prevent vignetting when using wide lenses with large format sensors.

Since they are compatible with ARRI, if you own an ARRI LMB 4×5, LMB-25, LMB-15 or LMB-5 matte box, you could also use these backs on your matte box.

Another difference with the Bright Tangerine backs is that they can all be supported on rails.

The Frame Safe clamp adapters are available in 11 sizes from 80 to 143mm.

Swapping out the clamp adapters works just like the ARRI ones, just unscrew the two mushrooms and slide off to release.

When using the matte box with a camera on a tracking vehicle, drone or jib, a safety loop provides a secure tethering point for a safety wire or lanyard.

The build quality is very good. I think the small improvements Bright Tangerine has made to the design have gone a long way to enhancing the already stellar build quality.

The new Reveal system is a lot more robust than the previous system that was employed on the original Misfit.

The Misfit Kick tips the scales at 7 oz / 198 g with two filter stages installed. It is incredibly light which is always a good thing when you want to keep the weight of anything you are attaching your camera to a minimum.

If you want to buy the Gripper Trays that work with the Misfit Kick, they will set you back $147 USD each.

We asked Bright Tangerine about this and they said that would look at offering the Gripper Module as an optional accessory so that customers can simply swap them out as they choose instead of buying a whole new filter tray.

The Misfit Kick is solidly made and based on my experiences with the original Misfit it is pretty safe to assume that this is a matte box that is going to outlast any camera you may end up buying.

I like the new Reveal system, although it did take a little bit of time to get comfortable with how it worked.

I did find the filter trays were a little hard to get in and out of the matte box and this is something that does make swapping over filters a little bit of a longer process than it needs to be.

I asked Bright Tangerine about this and they said this issue was addressed early on from the prototype trays.

The Misfit Kick isn’t aimed at the occasional user. it is being targeted at professional users of mid to high-end digital cinema cameras as well as rental houses.

As we’ve seen, the Misfit Kick is very modular but the building process can be simplified to 3 steps.

You need at least one Frame Safe clamp adapter which are $175 USD each.

B&H has the Misfit Kick kits bundled with the most commonly used clamp adapters.

From hereon, everything else is optional with options for rod support, swing away, clamp-on rings, and other donut accessories.

The base matte box is reasonably priced given the competition it is aimed at. The accessories do add up though and you can quickly find yourself spending a lot of money.

In some ways, it is good that Bright Tangerine makes their matte boxes very modular with lots of options, on the other, sometimes having too many options makes it confusing for customers.

To help simplify the process, Bright Tangerine has a Misfit Kick builder which you can view on their website.

There is a lot of competition when it comes to matte boxes. I am only going to concentrate on the few options I feel could be in direct competition with Bright Tangerine.

ARRI clamp adapters are $190 USD each, compared to $175 and only the 143mm variant can be mounted onto rails.

A matte box is a lot like a tripod, it is a long term investment that you can use for many, many years. To me personally, it doesn’t make a lot of sense to buy a cheap matte box just to end up replacing it in a few years.

The Misfit Kick is well made, robust and if you look after it there is no reason why you can’t get a lifetime of use out of it.

Bright Tangerine certainly offers a lot of customization and you can configure the matte box for whatever your needs may be.

The Misfit Kick is also not compatible with the older Misfit accessories besides the top & side flags due to the new style being made to be ARRI compatible.

If you are in the market for a new matte box or you are buying one for the first time then the Misfit Kick is an option worth considering. It has a good range of features and allows for a lot of customization.

For those with ARRI LMB matte boxes, you can also benefit from the Misfit Kick, with compatible Frame Safe backs, rod consoles, filter trays & hard mattes.