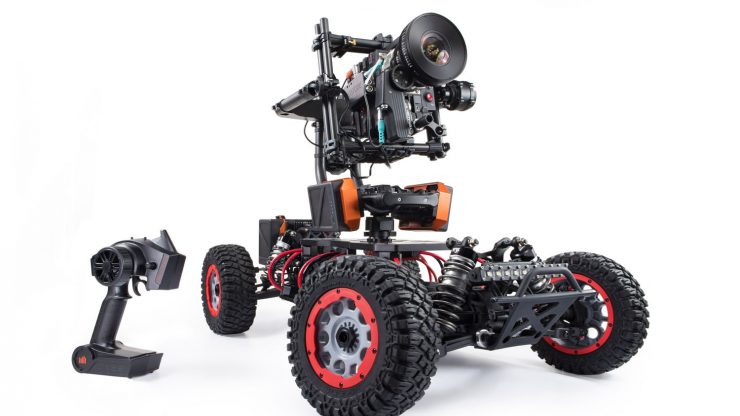 Kessler has announced the new KillShock Recon, a new RC buggy with an integrated modular isolator system designed for filmmakers.

The Recon uses the highly popular Losi DBXL-E V2 RC buggy as a foundation, which has been modified with new heavy-duty upgraded coil springs on each of the four shock towers.

To see what these buggies are capable of, check out the video below from Losi.

The locations for several key components have also been reconfigured for compatibility and the stock body cover and spoiler have been removed. The LED headlight bar system has been moved to the front of the buggy for night shooting and additional visibility.

The Recon comes in two flavours. Standard and Pro.

The Standard model is powered via Lipo 14.8v 4S batteries and has the stock Firma 160A ESC (electronic speed controller).

The Recon Pro includes a pre-installed Ignite Digi TB50 Recon Battery Plate Kit which was developed specifically for Kessler.  This option allows KillShock Recon Pro to be powered by two DJI TB50 batteries which run in parallel offering significantly longer run times than 4S batteries. It also has had the stock ESC changed to a 160AMP Dynamite Fuze ESC for compatibility reasons.

Just like Kessler’s KillShock, the Recon’s mounting plate features interchangeable Shock Modules that can be swapped out to adjust for varying payloads and application uses.

The mounting plate features mounting positions in the middle and an end of the plate for Ronin 2 and MoVi (M5/M10/M15/Pro) toad in the hole which allows you to center the weight in the front, middle or rear depending on which orientation used. The KillShock Recon modules can be mixed and matched to achieve a tuned payload and come in multiple strengths.   KillShock modules come in Blue Light Duty, Red Standard Duty, Black Heavy Duty, and Matte Black Extreme Heavy Duty.

The KillShock Recon comes with 6x Shock modules in a custom Red/Black/Red cable configuration which is the recommended combination for use with a MoVi Pro or Ronin 2 with a compact cinema camera and prime lens.

How fast can it go?

The KillShock Recon has a maximum top speed rating of 50mph/ 80.47 kmph, although it is not recommended that you drive it this fast. Particularly if carrying a full cinema payload.

Just like flying a drone, care needs to be taken when operating.

The KillShock Recon is available in two options.