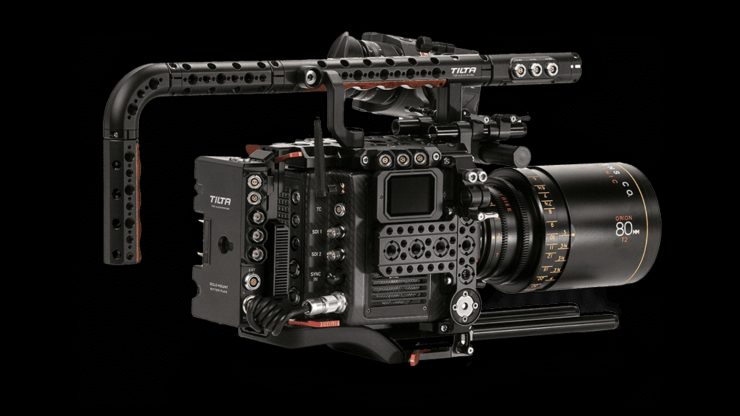 Tilta has a new camera cage for the ARRI ALEXA Mini LF/Mini as well as a deal where if you have one of their existing ALEXA Mini camera cages you can trade it in for the new cage.

The new Tilta camera cage is made out of high-quality aluminum, CNC-milled protective armor and it has several ¼”-20 and ⅜”-16 mounting points for attaching accessories.

The Tilta Standard Battery Plate for Arri Alexa Mini LF/Mini Cage (available in either gold mount or V-mount) integrates with the camera body to provide a range of power and video in and outputs.

There are pins on the top NATO rail of the plate that directly communicate with the top plate and top handle to transfers power so you can use them to more conveniently run other accessories.

The battery plate is attached to a sliding bridge mount so you can move it away from the back of the camera body to access the various buttons and ports and then slide it back right up to the camera body to make it more compact if need be.

An EVF holder can be mounted from the top plate that gives users 360 degrees of rotation so that you can customize how you want to use the EVF.

Top handle extensions are included that allow you to extend the length of the top handle.

Left and right side arms help to stabilize the cage and provide protection and they give you a variety of mounting points. These side arms also include Arri Standard Rosette connections so you can attach compatible accessories such as handles.

On the bottom of the cage is a 15mm LWS baseplate. The plate can mount to a Tilta Standard Lightweight Dovetail Plate.

Tilta is currently offering a promotion where you can trade-in your existing ALEXA Mini cage for the new Mini LF/Mini cage. Tilta will give you a $1250 USD credit so that the new cage will only cost you 50% of the retail price.

Cages don’t tend to fetch much on the second-hand market, so this is probably a good deal if you want a new cage for your Mini LF/Mini.