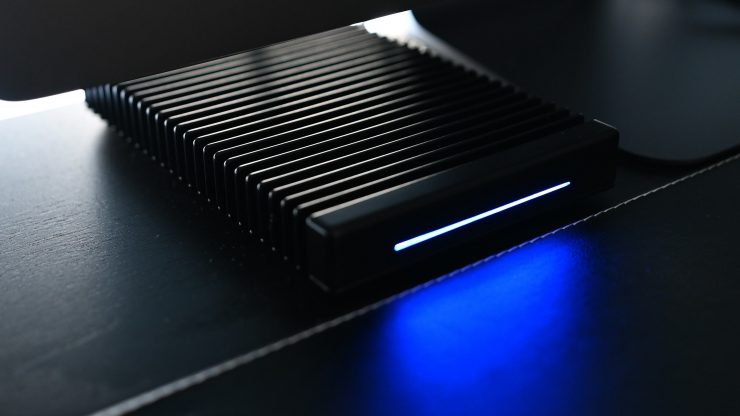 The OWC ThunderBlade is a superfast NVMe based Thunderbolt 3 hard drive that is capable of some mind-blowing speeds.

I recently stepped out of the dark ages and replaced my 2012 iMac. I also wanted to get some high capacity, very fast external storage for video editing. I looked around and considered a variety of options before settling on the OWC ThunderBlade.

Why do you need fast storage?

In a professional environment, time is money, and performance can make a world of difference when there are deadlines that have to be met. With high resolutions and more data being created than ever, fast, reliable, high capacity hard drives can make a huge difference. The ThunderBlade was developed for this exact purpose.

You can have a fast computer with a good GPU, lots of cores, and lots of memory, but if your external storage is slow, everything will slow down.

Now, the ThunderBlade isn’t for everyone. It is not aimed at consumers, it is squarely being targeted at professionals.

Why did I buy a ThunderBlade?

My last iMac served me well for more than 7 years because I literally ticked every upgrade box possible at the time. I’m not one of those people who upgrade computers and hard drives very often. I want something to last for as long as possible if I am going to spend my hard-earned money.

At the moment, the ThunderBlade is probably totally overkill for my requirements, but I know that by buying cutting edge technology, it will still be relevant in a few years time. Did I have to pay a premium to do this? Yes.

As my new computer has Thunderbolt 3 I wanted to find a drive that could take advantage of the speeds on offer. I only really considered NVMe storage. I looked at a lot of the available options and also looked into NVMe enclosures and buying the storage separately. From my research, I found that this wasn’t going to save me much money, and the more research I did, the more things lead me back to the ThunderBlade.

I also like that OWNC gives you a 3-year warranty with the ThunderBlade. From my own personal experience, I have found their after-sales support to be very good. You can literally jump on a live chat or call them up and someone is able to help you straight away.

You feel like your money is getting well spent when the ThunderBlade turns up in its own custom hard case. Is this overkill? Probably, but it is a nice touch none the less.

The ThunderBlade is beautifully made and it looks really nice sitting on your desk. Does that matter, no, but if I am going to be staring at a hard drive all day long on my desk don’t want it to look ugly.

Because of its low profile, it sits really nicely underneath an iMac.

The enclosure is basically one big heatsink because the ThunderBlade is passively cooled, it doesn’t use a fan. SSDs can get very hot, but because of OWC’s design, the ThunderBlade never gets hot, no matter how hard it is working.

The ThunderBlade is capable of delivering transfer speeds up to 2800MB/s. And with SoftRAID, two ThunderBlades can reach speeds of up to 3800MB/s.

The 8TB ThunderBlade is made up of four 2TB OWC Aura P12 SSDs.

Now, I emptied my wallet and bought the 8TB ThunderBlade, but to take advantage of the speeds that it is capable of you need to do a few things.

You don’t just get speeds over 2000MB/s by just plugging the ThunderBlade in.

The Thunderblade needs to be configured through the software utility SoftRaid that comes free with the ThunderBlade. Yes, you can also configure it through Apple’s Disk Utility, but SoftRaid is a much better tool.

When you launch SoftRaid you will see that the ThunderBlade shows as four separate 2TB SSDs.

To get the maximum speed performance I chose to Stripe all of my drives together. This way I can get a single, fast 8TB drive. I only use the ThunderBlade for video editing, so I don’t need to be able to rebuild the drive. I always have a back up of my FCPX Library and media on another drive.

If you don’t stripe the drives and you run a speed test you will find that the maximum speeds you can get are only around 700MB/s. While that is still fast, it is nowhere near 2800MB/s.

The reason behind this is because Thunderbolt 3 only provides a maximum of four PCI lanes. What this means is that you can only use one PCI lane per drive, and this is what limits the bandwidth.

So to take advantage of all four PCI lanes, you want to put one drive on each individual PCI lane. By doing this we can utilize as much bandwidth as possible.

If I do this and then conduct a speed test, you can see that now I can achieve speeds that are above 2000MB/s.

In fact, if I use a program like QuickBench (which I will talk about further down in the article), you can see that I can actually hit speeds of over 2500MB/s when writing data that is 1024MB in size. What is impressive is the average speed and the maximum speed are almost the same.

The above graphic shows random data between 20-100MB being written over a 100 cycles. You can also see just how consistent the speeds are when writing random data.

If I compare that to my Samsung T3 drive that I have been using for years (which cost me around $750 USD for a 2TB version 2-3 years ago) the speed difference is staggering.

Now, if you are an FCPX user like me, Blackmagic Disk Speed Test isn’t the best indicator of good performance from a hard drive. Why? Because of the way FCPX was designed. Unlike other NLE systems, FCPX relies on good storage to work efficiently. If you are storing your Library on an external drive, the program needs to be able to write lots of small files consistently to your drive. As the program is always autosaving, it is continually writing files to your hard drive. Every click of the mouse or keystroke is getting saved. These files are usually around 5 to 10KB.

Blackmagic Disk Speed Test only measures stresses of 1GB and above. It can’t tell you how efficiently your drive is able to write small-sized data.

To check this you can use a program like QuickBench. This is an excellent piece of software that lets you very carefully analyze disk performance.

Above you can see that the ThunderBlade is capable of writing small amounts of data very quickly.

As a reference, if my QuickBench results were under 1 MB/s, editing with FCP X would be a nightmare. Any speed above 10MB/s is good, once you reach speeds of 20MB/s or higher, your drive should be perfectly adequate for FCPX.

As a comparison, if I try and use a regular spinning USB hard drive, you can see the difference in speeds when writing smaller files. What is also interesting to see is the random read speed is very low and very inconsistent.

The Western Digital Elements took 3 minutes and 29 seconds. The ThunderBlade was 3560% faster than the USB3 drive.

Now, I must stress that if you are copying data, the speed at which it can be written will be determined by the read speed of your media or drive. If you are trying to copy an SD card, the ThunderBlade isn’t going to be any faster than your spinning USB3 drive.

If you are using fast media then it is is a good idea to have fast storage, especially if you are copying data on location. I often work with clients who bring super slow spinning hard drives when we have been shooting ProRes 4K and it takes forever to copy and verify two or more copies at the end of the day. If they brought fast storage, this whole process would be so much quicker.

As far as a FCPX example goes. I put a 20 second 3200×1600 ProRes 422HQ clip on a timeline, added a Gradient Blur, a color correction and used FCPX’s Noise Reduction and then rendered that clip in ProRes 4444. With the FCPX Library on the ThunderBlade it took 9 seconds to render.

When I did the exact same test with the same exact same FCPX Library on the Samsung T3, the render time was 47 seconds.

Now, getting back to the ThunderBlade, If you really want to get ridiculous fast speeds you can use two ThunderBlades in a Raid set up. Again, to maximize performance you have to do a couple of things.

Once two ThunderBlades are connected correctly and you have created a single Raid volume using both of them, you will be able to get write speeds that are very close to 3000MB/s and read speeds that are closer to 3500MB/s.

If you are using a Mac laptop that only has one PCI bus lane you aren’t going to be able to Raid two ThunderBlades together and get a higher speed.

All this performance comes at a cost, but if you factor in how much SSD storage cost 2-3 years ago, I don’t personally think the price of the ThunderBlade is that bad. My Samsung T3, which is 2TB in capacity, cost me $729.99 USD back in January 2017. This really puts things into perspective. If I had purchased four Samsung 2TB SSD drives back in 2017 it would have cost me $2919.19 USD.

the ThunderBlade comes in four different capacities, and here are the prices:

The OWC ThunderBlade is blazingly fast and it works as advertised. If you want a high capacity, fast SSD for video editing, that is also sleek, silent, and compact, then it is hard to beat.

Do you pay a premium for it, yes you do, but I personally think it is worth it.