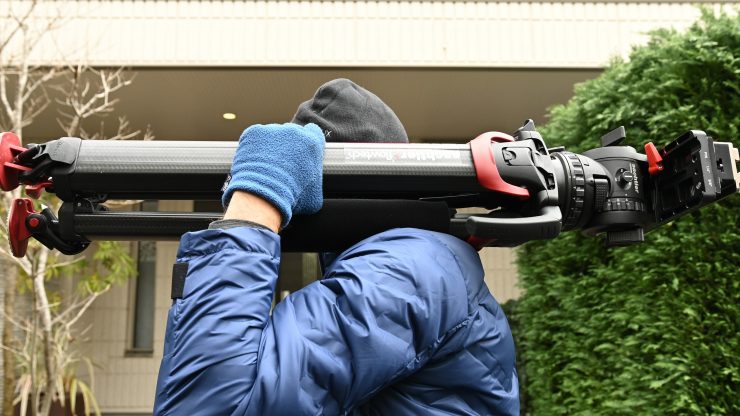 The Bluestar TriPad Comfort System for the Sachtler Flowtech 100 & 75 is one of those products that solves a real-world problem.

Like most news and documentary camera operators, I carry the tripod on my shoulder. Now, the Sachtler Flowtech 100 is a lot more comfortable to carry on your shoulder than other tripods, but because it is carbon fibre it does get slippery. Well, what if there was a way to increase the comfort of carrying the tripod and make it easier to handle in wet conditions?

That’s where news cameraman Chris Jackson comes in. After seeing my Sachtler Flowtech 100 review where I mentioned how the legs get very slippery when they are wet, he had a light bulb moment.

Here is how Chris describes it:

Immediately I had the idea that, unlike a Sachtler 18, finally a soft pad could wrap around one leg so that the sticks wouldn’t bite into your shoulder after carrying it for a long time.

Your review also said the legs could be slippery when wet. This is true – and I also found the legs to slip on my shiny GoreTex jacket. So I thought a pad with a little grip would be helpful, and I wanted to make sure that it could be easily removed to be washed or dried.

I’m just a news cameraman, not a businessman, so I teamed up with Eli Cremer, the maker of Eyecushions, in my hometown of Toronto.

I have used Eyecushions for years, and the Cremer family is pretty famous in the Toronto film world, with Eli’s father being the former Technical Director of Panavision Canada. So I knew the TriPad would be a quality product.

Eli took my suggestion, made and refined a few prototypes, and over the past year myself and fellow shooters tested the TriPad out – from Syria to the Arctic and from Downing Street to the Australian fires.

This the first thing I have ever ‘invented’, and it has been a fun experience getting inspired by you and then turning that idea into a real product.

It’s not a new idea

A pad for tripod legs isn’t a new idea. Many of the Miller lightweight models have them. However, Chris saw a gap in the market, and he thought a single pad that doesn’t make the Flowtech bulky but still offers comfort, would fill a niche in the market.

The Flowtech does have a handle, but like Chris, I still carry mine on the shoulder so I don7t put all of the strain on my arms. You can’t carry a tripod long distances by the carrying handle, you need to put it on your shoulder.

How do you attach & use it?

Attaching the TriPad itself is pretty simple. You simply wrap the pad with the straps on the inside of one Flowtech leg as tight as possible. You can position it wherever you like on the leg, but I found that 3-4 inches below the red latch seems to be the best place to put it.

It is made out of thick neoprene rubber.

It is nice that you can either choose to leave it on the tripod or take it off when you don’t need it.

How does it actually perform?

For me, any product I use has to do its job with a minimum of fuss. It shouldn’t get in the way or make your job more difficult.

The only problem I found with the TriPad, is in my case, I actually think I need two of them. Because of the design of the Flowtech tripods, when you put them on your shoulder the most comfortable way is when two of the three legs are actually making contact with your shoulder.

Now, in saying this, I have quite broad shoulders, and that’s what works for me. When I got other people to try carrying it, they preferred to carry it with only one leg resting on their shoulder.

The TriPad is certainly a lot more comfortable if you have to carry your tripod any sort of distance. It offers enough thickness that the tripod leg doesn’t dig into your shoulder.

After a while, you start to forget that the TriPad is even there.

The only small caveat you may find is if you are using a Flowtech 100 and a Sachtler SpeedLevel. Because of the thickness of the TriPad, you have to make sure that the legs of your tripod are pushed together tightly so the magnets lock. I found on occasion that the leg that was using the TriPad wasn’t always closing against the magnet. The easiest fix for this is to make sure you wrap the TriPad so that the thickest part of it once it is wrapped is on the outside of the leg and not the inside.

If you are using more than one TriPad then this is certainly something you need to be aware of.

Another easy fix would be to just move the TriPad another inch or so further down the leg.

The only other problem some users may face is that if you don’t have large hands you may find it difficult to grasp the leg when it has the TriPad on. In saying that, it is much easier to grab the tripod when it is slippery, wet, or when you are wearing gloves.

I was also curious as to why both sides of the TriPad weren’t non slip, so I asked Chris about this. He told me:

The rough texture outside and smoother inside fabric was the decision of co-inventor Eli. He manufactures the Eyecushions and has the expertise with all sorts of fabrics. I believe it has to do with making the inside wrap flatter and less air pockets.

That said, I have used the TriPad with this setup on every shoot for over a year now — and it has never budged on the legs. Rainstorms, in and out of hard cases and planes etc.

Also just to make you aware, if you are using a Sachtler Flowtech 100 with a Sachtler SpeedLevel clamp it can be a little hard to close the legs so the magnets grip. Were you aware of this?

Thanks for the information about the Speedlevel clamp. I believe one of my colleagues was testing the TriPad with a SpeedLock. We haven’t encountered any problems with that.

Because the TriPad has a non-slip surface on one side you can also use it for a host of other applications.

I found it was useful if I had to put my camera on the ground and get a low angled shot looking up. Because of the flexibility and strength of the neoprene material, it is easy to use the TriPad for so many things.

The TriPad also works well if you need to put something down on the ground. You can use the reverse side of it that is soft and place lenses or other gear on top of it when you out in the field so they don’t get dirty or damaged.

Often if I have to edit in the back of a moving car I have my computer on my lap. I can’t tell you how many times it has slid off my lap when the car has taken a sharp corner or hit the brakes too quickly. Not only can this potentially damage your computer and/or hard drive, but it can also jeopardize a story getting done in time.

I found I could use the TriPad on my lap and place the computer on top of it. This way it doesn’t move around and stays stable on my lap. I could also use the strap section to firmly secure hard drives or card readers.

The Bluestar TriPad Soft Pad retails for $50 USD. It is available from both B&H and Bluestar directly. Is $50 USD a little steep for a non-slip wrap? Probably, but anything being made in small numbers is going to be expensive to manufacture.

If it is something you are going to use over the lifetime of your traffic, then it isn’t really that much money to pay.

I love products that are designed by people who are actually working in the real world. The TriPad was born out of necessity, and that is normally where good products have their beginnings.

If you own a Sachtler Flowtech 75 or 100 the TriPad is a really worthwhile accessory. It is well made, easy to use, and it can also be used for other applications.

I’m actually surprised Sachtler didn’t make on of these themselves, but thanks to Chris, we now have a solution for a real-world problem.