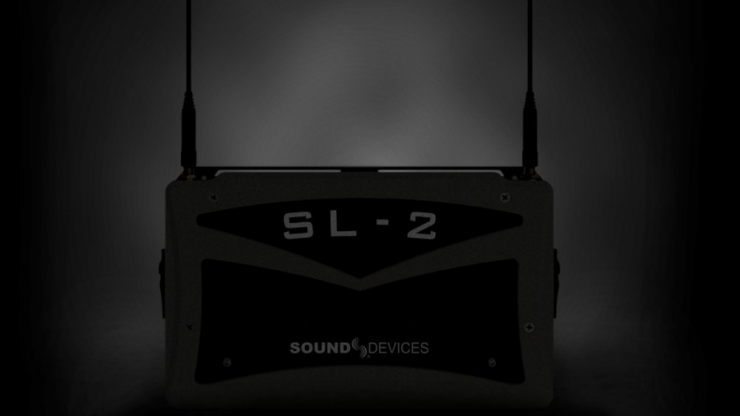 The Sound Devices SL-2 Dual SuperSlot Wireless Module is the first model in a new series of SuperSlot accessories that brings integrated multichannel wireless to the 8-Series mixer-recorders.

As any sound recordist will well know, having to run additional power and cables for wireless receivers can be a pain. The SL-2 was designed specifically to help solve this problem.

The SL-2 is a two slot-in wireless receiver integration system that mounts to the top panel of any 8-Series mixer-recorder. It accepts UniSlot and SuperSlot wireless receivers from a variety of manufacturers.

Power to the SL-2 and receivers is supplied by the 8-Series mixer-recorder – no external DC connector is needed on the SL-2. Analog or digital audio is sent from the receivers into the mixer-recorder via the expansion port, this enables users to do away with having to run additional cables and power.

The SL-2 offers antenna distribution to slot-in receivers, spreading out the placement of antennas for better RF performance. The rear panel of the SL-2 is equipped with two TA3 connectors for an additional four inputs of AES3 audio.

Which SuperSlot receivers are supported by SL-2?

Wireless receivers from several manufacturers are already supported, allowing you to use your existing transmitter and receiver.

Who can use SuperSlot?

SuperSlot is an open, electro-mechanical connection specification, developed by Sound Devices. It was designed to simplify the interconnection of wireless audio transmitters and receivers with audio mixers and cameras. As it is an open specification, any company can design products that can utilize it.

What features of a given receiver does SuperSlot support?

The 8-Series automatically powers all receivers slotted-in the SL-2 on and off with the mixer-recorder. After power on, the 8-Series mixer-recorder automatically sets the output of the receiver to analog or digital and sets the output level to achieve maximum dynamic range. The 8-Series menus provide access to RF scan, menus for receiver setup, RF frequency adjustment, TX status, RF and audio level monitoring, TX recording status, TX Limiter and overload status (A10-TX only) and more. Features available depend on the receiver in use.

Yes. It is the same width as the 833, making it a perfect fit for production bags.

How many receivers can I use?

How many channels per slot does the SL-2 support?

The SL-2 supports the SuperSlot spec, which has always supported up to four audio channels per slot.

The SL-2 can support four channels per slot. How about the SL-6?

Will it power my antennas?

Does the SL-2 have RF attenuators?

There are attenuators at the input of the RF stage that can be enabled in the 8-Series menus.

This is useful when experiencing heavy RF overload.

The SL-2 utilizes the same expansion port as the XL-AES so simultaneous use is impossible. However, the SL-2 does have two TA3 AES3 inputs for an additional 4 channels of digital audio.

Is there a ribbon cable or does it affix to the port directly? Can I move it?

The SL-2 connects directly to your 8-Series mixer-recorder without the use of ribbon cables. The SL-2 sits securely on top with the receivers facing you, allowing for ease of viewing while in your bag or on your cart.

Are there RF loop-through connectors?

Yes, these are only intended as an extra set of RF connections to another receiver or distro.

Is the SL-2 stackable?

The SL-2 is designed to be as lightweight and small as possible, and thus does not include provisions for stacking. Future, larger SL products will include stacking.

Is there going to be a larger model with more slots?

The SL-2 is the first model of a new range of Superslot-based accessories which bring integrated multichannel wireless to the 8-Series Mixer-Recorders. More information will be available in the future.

Can I use it with my SL-6 on Scorpio at the same time?

The SL-2 will not work in conjunction with the SL-6.

Will the SL-2 work with the 6-Series or MixPre II?

The SL-2 is an all-new design and will not work with the 6-Series or MixPre II Series.

There is currently no indication on pricing, but the SL-2 is expected to start shipping between Apri to June.