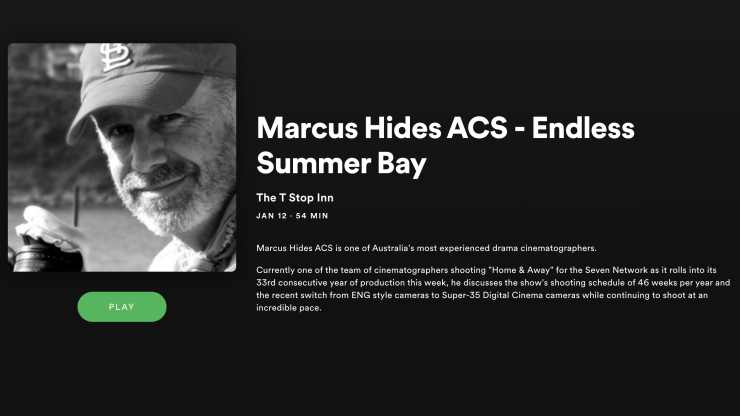 On the latest T-Stop Inn podcast, Ben Allan ACS CSI talks to Marcus Hides ACS about shooting TV drama. Marcus has been shooting the TV drama Home & Away for more than 10 years.

Shooting a TV drama that is on air 5 days a week is no easy task, which equates to 2 1/2 hours of screen time every week. Marcus films for 46 weeks a year and has to read 5 scripts every weekend!

Marcus and Ben discuss the rigors and realities of shooting episodic TV drama and how they are constantly striving to come up with better ways of shooting the show. They also discuss the recent switch from ENG style cameras to Super-35 Digital Cinema cameras.

If you are not familiar with Home & Away, it is an Australian TV drama that has been running 5 nights a week since 1988. More than 7,000 episodes have gone to air.

Actors such as Chris Hemsworth, Isla Fisher, Naomi Watts, Heath Ledger, Simon Baker, Isabel Lucas, and Guy Pearce have all been stars on the show.