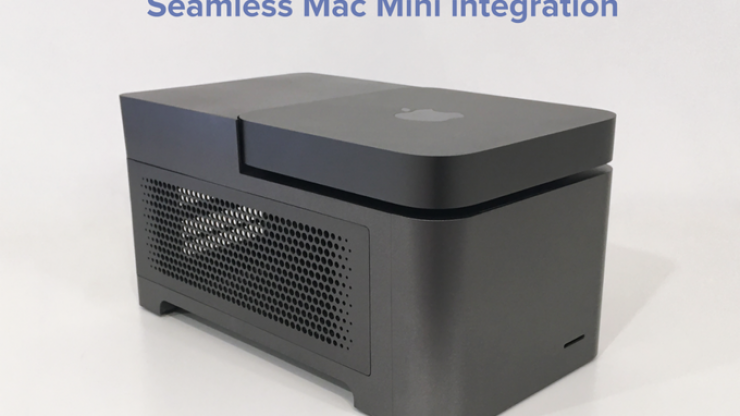 Animaionic is an interesting solution that turns your Mac Mini into a full fledged work station.

The Amimaionic is being touted as a docking station for extra graphic cards and SSD drives, making it a long awaited compact alternative to a Mac Pro giant.

ANIMAIONIC is an innovative approach to an integrated workstation, dedicated to a Mac Mini computer. It has been designed for demanding graphic artists and all creatives expecting greater possibilities and customisation in a minimalistic structure and form.

ANIMAIONIC is a docking station for two graphic cards and four SSD drives with a built-in SD card reader – all enclosed in a small and high quality, aluminium box visually matching a Mac Mini design. It has been created exclusively for the purpose of expanding the Mac Mini, taking this great little machine to a much higher level, transforming it into a compact yet powerful macOS workstation.

The Mac Mini is an excellent desktop computer which runs macOS system. Using 6-core processor it can be sufficient even for serious work. It gives the customisation possibilities by allowing to expand RAM memory and to choose a monitor of  preference. The thing is, that Mac Mini features Intel integrated  graphic chip and limited storage which cannot be upgraded. It is fine for office work, internet browsing and basic graphic work but it is not good enough for more demanding tasks, that is why the ANIMAIONIC was created.

What is it capable of?

According to ANIMAIONIC, the workstation gives graphic artists the freedom of choice, comfort and above all speed, as it accelerates the work of all graphic applications. The charts below show the efficiency comparsion of the ANIMAIONIC to the Mac Mini alone, as well as to the iMac Pro and the Mac Pro. These tests are from ANIMAIONIC and we have no way of indipendentally verifying any of the claims.

ANIMAIONIC has a built-in SD card reader on the front – always handy for uploading photos and videos.

ANIMAIONIC has just launched a Kickstarter campaign where they are looking to raise $657,498 USD by Sun, January 19 2020.

At the moment you can back the project is the following ways:

This is an interesting concept, but it is going to be quite costly to buy, and like any crown funding campaign, there are no guarantees that you will ever receive the product you are backing.

What do you think about this workstation dock? Would you buy one? Let us know in the comments section below.