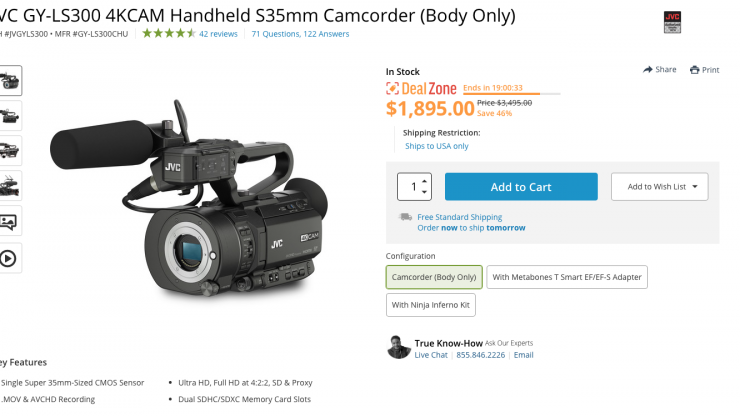 The GY-LS300 is quite a unique camera. It features an S35 sized sensor but it has an MFT interchangeable lens mount. One important difference from most Micro Four Thirds cameras is that the GY-LS300 uses a Super 35 imager—approximately 35% larger than a standard MFT imager. JVC’s mount provides full coverage of the imager meaning that Super 35 lenses may be used without vignetting.

For the professional on a budget, having a camera with this design can literally save thousands of dollars in new lens purchases. The GY-LS300 has a technology called Variable Scan Mapping. It involves some cropping and scaling of the sensor depending on what size image the lens is made to cover and what resolution your working in. This way it can utilize not only 4/3 MFT lenses but older Super 16mm lenses as well. Super 16mm lenses will only work when recording HD. How does it work? With the right third-party adapter and lens, VSM intelligently remaps the pixels on the sensor chip in accordance with the native field of view of the lens so that the pixels fill the entire picture frame— thereby eliminating vignetting.

If you want to know more about the camera I dd a review on it way back in early 2015!

The camera never really took off, but it actually offered a lot of functionality in a small sized camera at launch. While there has been a ton of other cameras released in the last 4 (well it is almost 5 now) years that have probably made it a little obsolete, it’s still an interesting camera to reconsider especially at under $1900 USD.

B&H also has the following deals on JVC GY-LS300 packages:

Have any of our readers ever used or owned a JVC GY-LS300? Let us know in the comments section below.