In a nutshell, the new RØDE VideoMic NTG is a hybrid on-camera VideoMic/NTG shotgun mic with a pretty impressive feature set.

It is being targeted as a do-it-all mic that can be used on-camera with DLSRs/smartphones, as a boom mic, or as a USB mic for recording voiceovers, podcasts, live streaming, etc.

It features the same new acoustic design as the high-end NTG5 that RØDE just released. Just like the NTG5 it also features a very lightweight design and tips the scales at 94g (3.3oz).

The new mic has a highly directional super-cardioid polar pattern and a unique infinitely variable gain control, that allows the user to precisely adjust the mic’s output, from mic level to line level to headphone level. This active control is claimed to provide a greater output range than any other microphone on the market, allowing the mic to deliver anything from mic level signal all the way to a headphone level output.

There is an Auto-sensing 3.5mm output that automatically switches between TRS and TRRS to accommodate both cameras (TRS) and mobile devices (TRRS), which saves you from having to use any adaptor cables.

The USB-C output lets the VideoMic NTG become a fully-featured USB microphone that can record directly to a computer, tablet, or smartphone.
It also has a headphone output for audio monitoring while using the USB output. The USB-C output also doubles as a charger. You can charge the microphone in under 2 hours according to RØDE.

The VideoMic NTG has a high-pass filter (75Hz or 150Hz), – 20dB pad, high-frequency boost, and safety channel. For added security, the switchable safety channel records a separate channel at -20dB in case the main channel clips.

There is a dB peak warning light and an In-built rechargeable lithium-ion battery that is claimed to provide up 30+ hours of recording. Charges via USB-C in just 2 hours.

Just like most RØDE microphones, the VideoMic NTG uses the Rycote Lyre shock mounting system with cable management, plus a sliding rail mount to adjust mic placement on the camera’s cold shoe.

“This is the next chapter in the VideoMic story, combining decades of research and development of high-quality microphones for professional filmmakers and broadcasters with a deep understanding of the needs and wants of the modern content creator. With the VideoMic NTG, we have once again redefined what on-camera microphones are capable of.”

The VideoMic NTG will cost USD$249 and it is shipping as of this week. 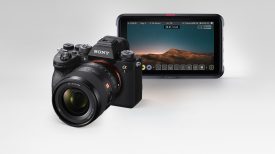