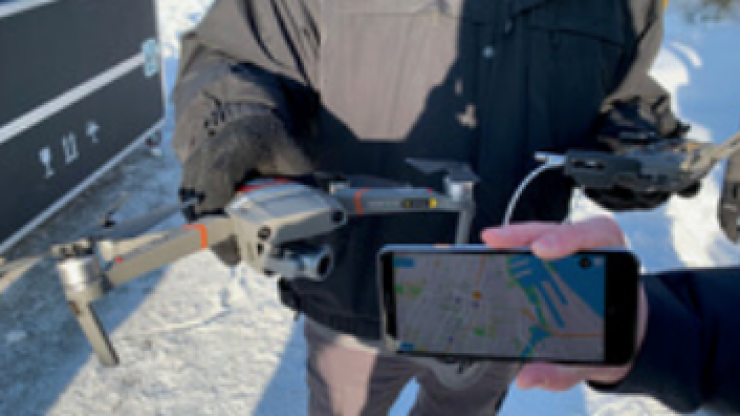 DJI is working on a direct drone-to-phone, Wi-Fi based solution to remotely identify airborne drones. This will make it easy for anyone with a smartphone to monitor nearby drones.

DJI’s remote identification solution has been developed in collaboration with industry stakeholders and regulators. It is able to broadcast information from drones directly to any mobile phone using existing Wi-Fi protocols. Using a simple app, anyone within radio range of the drone can receive that signal and learn the location, altitude, speed, and direction of the drone, as well as an identification number for the drone and the location of the pilot.

Now, of course this is only going to work in countries such as the US, where drones have to be registered with the FAA. I can’t see many members of the general public having a drone identification app on their phone, but it is certainly an easy way for law enforcement, security services, airports, and other agencies to easily be able to identify a drone if it is flying somewhere it shouldn’t.

This is also bound to be controversial as far as privacy is concerned. If your drone is registered your name will be out there for anyone with the app to see when you are flying your drone.

“Remote ID functions as an electronic license plate for drones, allowing anyone who is curious about a drone in the sky to learn more about what it’s doing, Around the world, aviation authorities have said remote ID is the key to allowing more complex drone use, and to solving concerns about safety and security. DJI’s direct drone-to-phone remote ID shows we’re committed to providing a solution in a way that is instantly usable worldwide without any additional infrastructure.”

Aviation regulators in many countries are moving to require remote ID systems for drones as a solution to concerns about drone safety and security. The U.S. Federal Aviation Administration (FAA) has said it will release a mandatory remote ID proposal by the end of this year. The rulemaking process will take more than a year to complete, but an FAA industry committee has urged manufacturers to develop voluntary remote ID systems in the interim. The European Union Aviation Safety Agency (EASA) will impose remote ID requirements in July 2020. The app and the associated drone firmware updates used for DJI’s demonstration this week are not yet available for public use, pending further direction from aviation regulators and final publication of the ASTM International standard.

DJI’s system was built to conform to the forthcoming ASTM International standard for broadcast drone remote ID, developed over a period of 18 months by a broad group of industry and government stakeholders. The solution uses the Wi-Fi Aware protocol for mobile phones, which allows the phones to receive and use the Wi-Fi signals directly from the drones without having to complete a two-way connection. Because it does not need to connect to a Wi-Fi base station, a cellular network or any other external system, it works in rural areas with no telecom service. In DJI’s preliminary testing, the Wi-Fi Aware signals can be received from more than one kilometer away.

The new direct drone-to-phone solution is an evolution of the broadcast methodology pioneered by DJI AeroScope, the professional remote ID system first introduced in 2017 for airports, prisons, stadiums and other critical locations protected by police departments and other government agencies. AeroScope broadcasts a drone’s location, altitude, speed, direction and identification number, as well as the location of the pilot, using different radio protocols that can be received from miles away by special receivers developed for safety and security authorities who most need it.