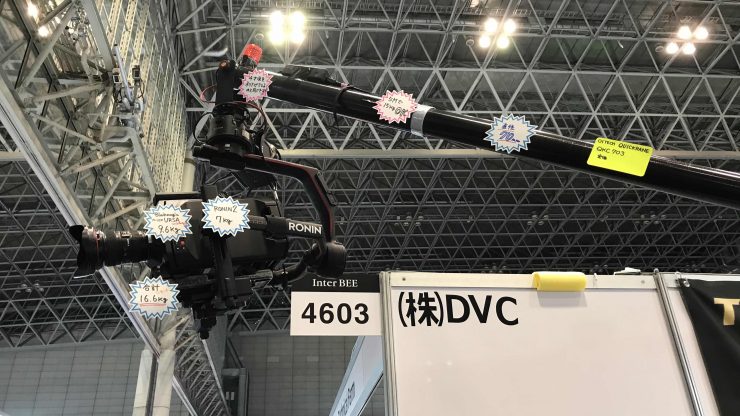 It might have a complicated name but the 01Tech Quickrane QKC 703 looks like a very easy to use and portable (well, as portable as 5m cranes go!) crane for large cameras.

The actual pieces that make up the crane are made out of carbon fiber and they have been manufactured so that they insert inside the larger sections. The overlap is around 15cm. The further out you go, the smaller the diameter the sections become. This is almost exactly like how a regular crane works.

The benefit of using carbon fiber sections is that not only are they incredibly strong and lightweight, but they come in small enough sections that make it easier to travel with a large crane.

The 5m long crane that was on display broke down into 2 sections of carbon fiber tubing, each a little over 2.65m long.

The Quickrane QKC 703 could easily support heavy payloads. On the booth, they had a DJI Ronin 2 with a camera and lens combo that tipped the scales at 16.8kg.

The kit includes a custom tripod mounting plate and bracket for mounting counterweights.

I like the ingenuity of the design and if you are traveling to far-flung places it is a lot easier to carry around carbon fiber sections than one giant aluminum or steel piece that would be impossible to check in on a flight.

This isn’t the companies first foray into building cranes. They already have quite a few other versions available.

There is no pricing or availability just yet as this had just been finished ahead of Interbee. NHK is taking one to Africa for filming next week.